Turns out that mustard and charcoal have more in common than just hot dogs. 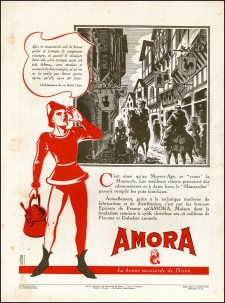 We talked about the history and science of mustard a bit in the post for the French’s mustard insert from Lutz, Florida, but really only touched on Dijon mustard briefly. But to really explain the story of mustard and France, we have to know a little bit about charcoal. (I promise, this’ll all connect. Just go with it, for now.)

Coal–like the kind they mine out of the ground–is essentially made of carbonized plant matter. And another way to make carbonized plant matter is to burn plants slowly in a low-oxygen environment, leaving behind chunks of carbonized residue. That’s charcoal. Production of charcoal predates recorded history, because burning tends to produce some amount of charcoal, but by 3,500 BC, charcoal was being intentionally produced as fuel in Europe and the Middle East.

By the 19th century, the method used to produce charcoal was most typically to make a pile of wood with a space in the middle (either outdoors or in a stone kiln), then cover it with earth except for a small hole at the top, and then to slowly burn the wood into charcoal and its by-products. The by-products? Smoke, which we’d eventually figure out was pretty bad stuff; wood tar, which was in high demand for keeping ships waterproof (particularly pine tar, the byproduct of burning pine); and wood ash.

Wood ash varies a bit depending on what you’re burning, but virtually all of it has a substantial amount of potassium carbonate, an ingredient important to commercial fertilizers even today. It also has nitrates, sulfates, and chlorates, along with trace minerals–all of which enrich soil for growing plants. Nitrogen and sulfur in particular will improve the quality of mustard plants.

Now, while colliers (that is, people who produced charcoal) were exceptionally skilled laborers, capable of sensing from the smell and heat when the fire needed to be stoked or smothered, the life was not especially social. Most lived in huts adjacent to their wood-piles so they could tend the fire over the roughly five days it would take to convert to charcoal. Having access to a ready supply of free, powerful fertilizer, the colliers near Burgundy would grow particularly potent mustard seeds as a source of income on the side. And many no doubt sold them, but some certainly prepared their own mustard.

Converting these seeds into a prepared mustard was another job suited to someone with time on his or her hands. Automation did nothing to benefit mustard-producers in the late 18th and early 19th century, because the volatile oils in mustard seeds could easily be destroyed by heat. So in the early 19th century, mustard seeds would have to be ground slowly, by hand, with a mortar and pestle. At that point, the seeds could be mixed with vinegar to create a bitter, hot, and off-putting paste. Aged in a jar over a few days, those flavors would mellow and produce a coarse brown-ish mustard that probably still smelled slightly like a forest fire.

Now, at some point, someone in Dijon started adding verjus (from vert jus, or green juice), the juice of unripe grapes, instead of vinegar. The flavor of verjus is typically some combination of sour and acidic, but it varies as much as wine itself does. But exactly when that happened isn’t entirely clear. Let’s look at a variety of theories from books:

So who is correct? Well, certainly not Chicken a la King. For one thing, Wikipedia agrees with it, and Wikipedia is almost always wrong about this stuff. But another thing that makes a 19th-century origin of Dijon mustard unlikely is the numerous 18th-century advertisements for it, like this one from the December 25, 1787 edition of The World from London, England:

(Since you’re probably wondering, arquebusade water is an herbal infusion of water that originally was primarily an astringent used to stop bleeding, but came to be viewed as an internal stomach tonic. Vinegar of the four thieves was a similarly herbal vinegar thought to prevent contracting diseases. While there are different versions, the most common mythological origin is that four thieves used the vinegar to rob the homes of sick people during the Black Plague, and when caught, exchanged the recipe for their freedom.)

The best authority I’ve been able to find is Alexandre Dumas’ exhaustive 1879 Grand Dictionnaire de Cuisine, who gives a pretty detailed chronological history of French mustard, including a bit about the Naigeon family’s contributions to Dijon mustard. He places Jean Naigeon’s verjus between the formation of the consortium of 23 mustard producers in Dijon 1634 and the introduction of anchovy and caper mustard in Paris in 1742–and notes that Jean Naigeon was the great-grandson of one of the original signers of the consortium rules.

Assuming then the Naigeons had a comparatively average lifespan (for those who made it out of childhood) of around 45 to 50 years, and assuming they started having children around 20, then the window (accounting for the possible age of the original Naigeon) would seem to suggest a great-grandchild would be born 50 to 60 years after the signing, and would be in his 20s or 30s by 1713. And as Dumas suggests by naming a Naigeon thereafter, they were a prolific bunch, so it’s entirely possible the records could be a bit confusing.

A description of the underlying elements of Dijon mustard’s flavor appeared in the June 12, 1880 edition of The Indianapolis Journal:

Of course, lots of changes have happened to Dijon mustard since Naigeon got done with it. The verjus was gradually replaced with white wine–in fact, for decades, there weren’t any commercial producers of verjus, which has enjoyed a culinary comeback lately. As France’s charcoal production diminished, so too did its production of mustard seeds, which it now imports from Canada.

I was hoping to get to Grey Poupon today, but I worry I may have mustarded you out. Another time?