A gluten free cookie with a slight cultural hurdle. 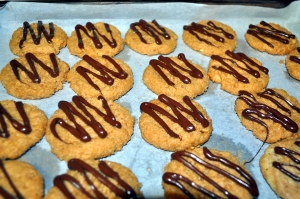 In the early 1970s, my mother was an immigrant just starting college. She went to a fraternity party and someone had just gotten a care package of cookies from his mother.

(I went to Fordham’s Lincoln Center campus for my higher education, which doesn’t have any Greek life, because it’s in the middle of Manhattan and there’s plenty of social things to do without the hazing. But if fraternity parties are places where people distribute care package cookies, then I’m starting to think that I was lied to by John Landis and the people at National Lampoon.)

These were those cookies, and she got the recipe; it was the first American cookie she ever made.

Now, the odd bit is that neither the cookies from that party nor the ones in the recipe followed the hypothetically defining characteristic of a peanut butter blossom: a chocolate kiss in the middle around which the cookie slightly puffs, resembling a flower. (Sort of.) But we’ve never missed them, and frankly, I don’t think I’d like a brown flower with a dark brown center. “Give me the brown daisies,” said no one, ever. 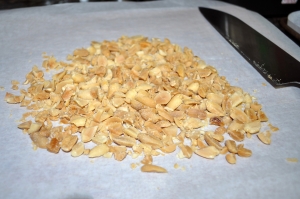 Instead, these are topped with a chocolate drizzle, or crushed peanuts, and the quick roll in sugar gives them an additional hint of crunch before the richness of the peanut butter sets in. And they are rich; both because of the peanut butter and being gluten free, they come out of the oven in more or less the same shape as they went in, although that’s true of pretty much any fork-flattened peanut butter creation.

The party where my mom got the recipe was pretty close to the chronological debut of these cookies in American cooking. From the 1910s to the 1960s, peanut butter blossoms were a candy with a caramel outside and peanut butter inside. One of the earlier recipes for the cookie iteration appeared in the May 15, 1971 edition of The Oneonta (New York) Star: 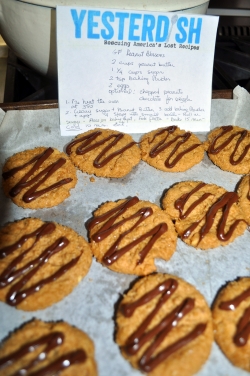 In recent years, the flour-free version has become the norm, floating to popularity with the rise in gluten-free diets, both medical and fad. I think they’re a good representation of how to survive on a restricted diet, actually.

Too many people try to find substitutes for the things they’re missing, rather than celebrating the things they have. To paraphrase Edna St. Vincent Millay, a restricted diet locks you into as much as it locks you out of. If you can’t have something, don’t live your life trying to make ersatz versions of it.

Think of it this way: a piano can make more notes than a bugle. It’s a mistake to try to use a bugle to play piano music; just play music for a bugle.