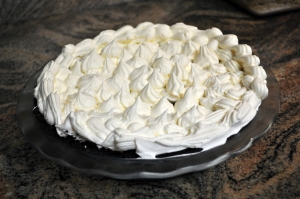 It’s hard to have a bite of Fort Knox pie and not ask, “how was this not the absolute first pie we ever made?” It’s like the toppings of an ice cream sundae fell into a chocolate pudding. What were we thinking, wasting our time with apples?

I remember Fort Knox Pie when I was growing up. Pies in general struck me as sort of fussy desserts. I felt the Fort Knox pie was somewhat more masculine because it was named after a military installation and would bleed (caramel) when you cut it.

(If that doesn’t make sense to you, you’re probably a girl. Why don’t you get out of the kitchen you girl. Go do women’s work like being a senator or something.)

Fort Knox Pie is the dominant species emerging from a century of pastry evolution.

People have all kinds of “memories” about growing up with Fort Knox Pie in the 60s and 70s. I’m sure there were pies a lot like it. We’ve been trying to combine gooey caramel and chocolate for about a hundred years. For example, here’s a gelatin-based chocolate pie with a caramel sauce from the November 16, 1928 Athens (Ohio) Messenger, from their cooking school (on the menu for “Weight Control”) (to be fair, it doesn’t say in what direction):

But did anyone have Fort Knox Pie in the 1960s? Not so much.

You’re probably curious to know where Fort Knox Pie came from. I guess it depends whether you’re asking about the name or the recipe. 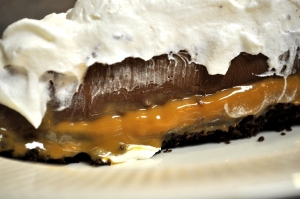 The name is easy; it almost certainly came from someone working at Nabisco between 1994 and 1995. Where we came up with the pie itself is more complicated. But let’s start at the beginning, shall we? (And stop whining. I assure you, this is the short version.)

In the 19th century, making gelatin was an exhausting task. First, you’d have to acquire hooves or hide sufficient enough to extract the gelatin. (Today, most gelatin is derived from pig skin, but cow hide and bones are also used.) The material would be boiled for over half a day, then strained through cheesecloth; the result would be allowed to settle, then skimmed, and occasionally boiled, strained, and skimmed again, until the result was a clear, flavorless block of collagen. 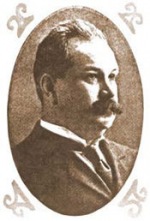 At this point, the block would be used fresh, or it could be poured thin and dried in sheets, then stored in the pantry. If that sounds like an awful lot of work to get a terrine, well, Charles B. Knox would agree with you. In 1891, Charles and his wife Rose opened a factory their home town of Johnstown, New York producing a granulated gelatin.

After Charles’ death in 1908, Rose would run the company for about half a century, becoming an exceptionally successful businesswoman. But among the other things Rose did was to write cookbooks, originally free and ultimately low-cost, instructing housewives as to how gelatin could simplify their lives. 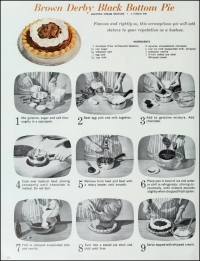 There were lots of pie recipes, but none of them were for anything resembling Fort Knox Pie. The closest recipe is to the one to the right, from 1952’s Knox On-Camera Recipes: A Completely New Guide to Gel-Cookery. Swap out evaporated milk for cream and add whole eggs and you’re well on your way to the chocolate layer of a Fort Knox Pie.

Another evolutionary step toward the Fort Knox Pie occurred in 1966, when the Knox company and the Oster company–manufacturers of the Osterizer blender–collaborated on a bunch of “blend-and-gel” recipes. As described in the September 29, 1966 edition of The Milwaukee Journal:

This ultimately led to the Turtle Pie, an ice cream creation of Baskin Robbins seen in late 1970s advertisements. That version is a chocolate crust with praline ice cream topped with pecans and runny caramel sauce. But people wanting to take that dessert and return it to its non-refrigerated origins started making a version they called the chocolate turtle pie or the caramel chocolate torte or even chocolate caramel pecan pie. 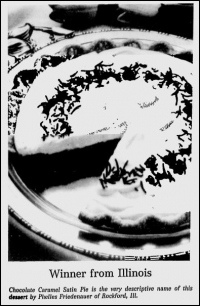 But it was really Phyllis Friedenauer of Rockford, Illinois who popularized the structure of what would become Fort Knox Pie in 1988. She was a finalist in the 1988 Pillsbury Bake-Off with her entry of a Pillsbury All Ready Pie Crust filled with a layer of creamy caramel and walnuts underneath a layer of white and dark chocolate, which she titled chocolate caramel satin pie.

But that’s still not quite a Fort Knox Pie. That recipe didn’t show up–almost identical, right to the number of caramels–until around 1995. There’s a version in the March 22, 1995 edition of The Milwaukee Sentinel under the name chocolate caramel pie.

So that sort of brings us back to Nabisco and the name Fort Knox Pie. Try to follow along.

In the 1970s, The Thomas J. Lipton company (which we’ve talked about before) bought Knox Gelatin, Inc. In 1992, Lipton was bought by Knorr, a subsidiary of Unilever.

In 1994, Knorr sold the Knox business to Nabsico, which was trying to compete with Kraft foods’ ownership of a little brand called Jell-o. As far as I can tell, Nabsico owned the brand at the time when the Fort Knox Pie name started to appear. 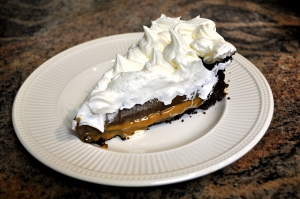 Not exactly rocket surgery–lots of buried gold, isn’t it?

Nabsico and Kraft would merge in 2001 and a bunch of brands were sold in the wake of that. Knox was sold to Nature’s Bounty vitamin manufacturer NBTY, as the name is used on dietary supplements for nail health, but NBTY licensed the name back to Kraft for culinary gelatin.

That’s a lot of big business just to name one little pie. But what a pie. Fort Knox Pie is the dominant species emerging from a century of pastry evolution. The caramel is thicker than a standard caramel sauce, while the chocolate is silky and yielding. A piece of Fort Knox Pie and a cup of coffee and you’ll wonder why we ever put fruit in pies.

Baked after it is pressed in place, 350 deg. F. 10 min. Cool completely before continuing.

Bloom gelatin in water over low heat, 1 min. Stir in 1 c. cream. Boil, then add to blender with chocolate while hot and blend till chocolate is melted and incorporated. Pulse in 1/2 c. cream, vanilla, and eggs. Transfer to bowl and chill 15-20 minutes.

Combine caramels, 1/4 c. cream and butter in saucepan. Simmer till melted, then pour into crust and cool 10 minutes.

Beat chocolate mixture till smooth, then pour into crust and chill till firm. Garnish with remaining cream, whipped.

Note: we omitted the pecans in the one we made here because Dori is allergic to tree nuts. “Boo hoo, I’m Dori, I don’t like it when I have allergic reactions because it’s painful and dangerous.” I don’t know if you know her but that is so what she sounds like.