With black olives, an American original.

Most olives are black when ripe, but canned olives are never ripe. And yet, you’ll never get a pitted black olive out of a jar.

Confusing? Not really, if you think about how olives grow and how canning works. Let’s look at the olive growing process first.

An olive on the tree starts out green and grows to full size before any color change. At this point, the olive is extremely firm. The color starts to turn to some variation of purple or black, and over time, turns completely to that darker color. The flesh of the ripe olive is soft–so soft that it’s easily bruised.

Oh, and there’s another detail: all olives, green or ripe, are rich in a compound called oleuropein, which tastes like this:

Poor Mary. Someone should’ve told her that oleuropein is added to household products specifically to make them extremely unpalatable and avoid children eating them. You will never accidentally snack on a raw olive–the pain-inducing bitterness will adjust your priorities quickly.

So ever since the Romans, the art of curing olives has been to tame their bitterness. Whether with water, brine, salt, or lye, the bitter compounds are leeched out. As many of these methods strip the olive of all flavor, good or bad, the olives are then sometimes fermented before being packed in brine (except for salt-cured olives, where the herbs are added to the salt) and preserved. Now, to preserve these olives in a jar, the brine has to be salty enough and acidic enough to inhibit the growth of bacteria.

This is where California comes in. In the 19th century, there was a rise in the demand of olive oil in America. As olives grew particularly well in California, olive groves proliferated. Two researchers at the University of California, George E. Colby and Frederic T. Bioletti, explored different ways of preserving the flesh of olives, and found a method for canning them. 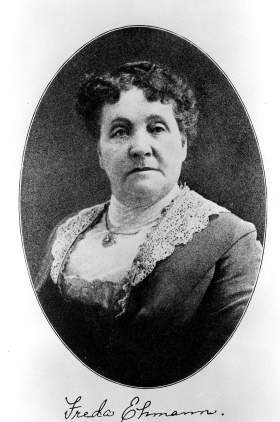 Green olives are first placed in a brine that includes lye. After that brine is washed away and the olives exposed to the air again, they start to turn darker. Then that brine is washed away, the olives are removed and placed in a can with a second brine, and the can is then sealed. When opened, the olives might have turned darker from the canning process, emerging brown and green, but were pretty mild and had a good meaty texture.

The significance of this method would’ve been wholly academic, however, if it wasn’t for Freda Ehmann. In the 1880s, Freda sold her house in Illinois to fund her son’s purchase of an olive grove, trying to capitalize on the olive oil boom. But the market fell out, of course, and by the 1890s, Freda owned twenty acres of olive trees that didn’t produce a high yield anyway.

Ehmann set about curing her own olives, but had a quirk about how she liked to do things: she wanted the olives to be wholly black before they were brined. This led to a three-step process, and ultimately, the second brining used today, when an iron-derived salt called ferrous gluconate is added. Ferrous gluconate is black and turns the olives the color we’re familiar with.

Once Ehmann became familiar with Colby and Bioletti’s work, the final piece of the puzzle to create the California black olive was in place. Remember how I said how, traditionally, olive brine had to be salty and acidic to preserve the olives safely? The canning process does the job of preserving the black olives. This means that the black olives don’t have to be salty or acidic, and can have the mild flavor we love on nachos and pizzas.

Ehmann traveled around North America in 1898 selling her new product. By the time she returned home, she had orders for ten thousand gallons of olives, but her orchard only produced a thousand.

And the next time a food snob says they shun black olives because they’re flavorless, feel free to remind them that the actual taste of an olive is bitter hate, the flavor they really enjoy is salt and vinegar, and if they want salt and vinegar, they know where to find a chip shop.

Grind together above ingredients.