Don Holm was more than a fisherman. 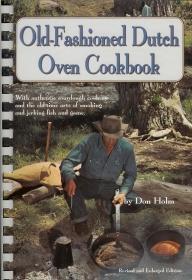 To be fair, though, trying to describe all of the jobs Holm held would take some time. I’d generally call him a sportsman-traveler-journalist-historian-pilot-foreman-sailor-fisherman, with a dash of survivalist in there, too.

Don Holm was born in 1918 in North Dakota, the son of a blacksmith who was the first Generation born in America from a Swedish family. Although he attended four different colleges at this time, he kept trying his hand at different types of labor in different places.

He worked in construction, building dams in Western states; logging; commercial fishing; and by 1940, he was gold mining in Alaska.

While he was in Alaska, he sold his first story to Alaska Sportsman magazine, titled, “In Alaska, of All Places!” “You’d expect dog-team races and skiing, but not football, baseball and tennis!”

After serving with the Navy in World War II, Holm stayed near where he was discharged in Bremerton, Washington, finished his education, and spent a decade working in advertising before getting a job as a general assignment reporter with The Oregonian in 1960. In 1963, he married Myrtle Seabold, who would go on to co-author some of his cookbooks. By 1969, Holm was the Wildlife and Outdoors editor.

In his writing, Holm often drew on his experiences traveling in rugged country and passed along the practical wisdom he’d learned, both about living off the land (as he did in this smoked fish recipe) and about sometimes forgotten food traditions. In 1972, he wrote a book specifically focusing on sourdough recipes, a tradition well-known to Alaskans, where many families still feed starters that came to Alaska during the Gold Rush.

His basic starter recipe was included in a book review from the September 17, 1972 edition of the Nevada State Journal:

Holm wrote to preserve frontier recipes and techniques, but it’s not as though many of those recipes were fixed, or the authors had any experience in teaching those techniques in print. Holm didn’t have the advantages I do here, with centuries of digitized history at my fingertips to help me fill in the blanks.

Perhaps the best summary of his role in this process was the description of one of his books in an ad from the June 27, 1970 edition of The Billings Gazette:

Then next morning remove fish and dry thoroughly with paper towels, but do not rinse. Put immediately into smoker for 8-10 hours.

(Delicious) if that’s how you spell it.