Made in the microwave. 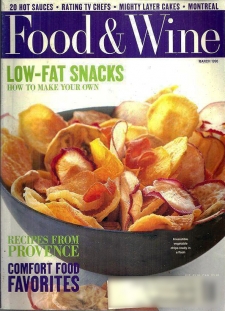 This was the recipe on the cover of the March 1996 edition of Food & Wine, created by the now legendary Grace Parisi. You might not recognize the name, but if you’ve seen any food-related television involving guest chefs in the last decade, you almost certainly will recognize her face; if you’ve read a magazine with a recipe in it in the last decade, you’ve probably seen her recipes, too.

In the late 1990s, Parisi worked in the executive dining room at Food & Wine before moving over to the test kitchen, where she’s still a senior test kitchen associate. She was nominated for a James Beard award for her book Get Saucy in 2005. Before cooking, she was a visual artist (which makes me think I ought to peruse her gallery for styling ideas so my original posts look less like culinary autopsy photos).