Dates have been cultivated in the Middle East since at least 4,000 B.C., and Jesuit missionaries first planted date palms in California in 1769. But the amount consumed really spiked after Paul and Wilson Popenoe transplanted 16,000 date palms from Iraq to California in 1912 and 1913 to support their father’s nursery, which at the time had been primarily interested in avocado cultivation.

(Wilson, the younger brother, returned to avocados and made a name for himself as an expeditionary horticulturalist, particularly in South America. Paul was an early contributor to the field of marriage counseling, dabbling with eugenics-based theories until abandoning them around World War II.) 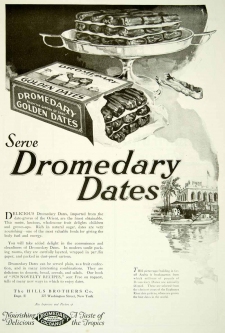 As the plants spread through the Coachella valley, the cost of dates (which previously had to be imported from the “date-groves of the Orient” as the ad suggests) went down, and people experimented with different applications.

An interesting quirk about date palms is that the trees are either male or female and neither birds or insects are attracted to the flowers. Hypothetically, the wind could do the job, but if you’re inclined to plant a dense grove, you’re going to have to climb them and do it by hand. Until 1973, this job was done entirely by hand; now, the pollen is harvested by hand, then sprayed mechanically on the trees (with or without pesticides).

This recipe appeared in the November 13, 1924 edition of the San Antonio Light:

A little more detail is provided in the copy from the January 18, 1928 edition of the Xenia, Ohio Evening Gazette:

A sandwich with a similar flavor profile appeared in the July 10, 1921 edition of the New York Tribune:

Wash and dry dates put through food chopper. Add peanut butter and salt. Mix and roll into small balls; then cover with sugar. Lay on plate to dry.