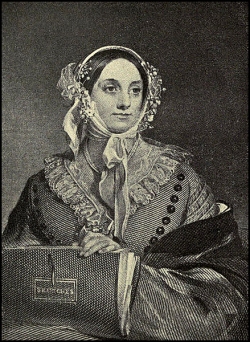 When people talk about the earliest recipe under the name cupcake, they usually point to Eliza Leslie’s 1928 publication of Seventy-five Receipts For Pastry, Cakes, And Sweetmeats. Well, fair enough, that’s the oldest mention of the words “cup cake” in that order that I’ve found, too.

But when you actually look at the recipe, it’s pretty quirky. The name seems to refer primarily to the measurement system and not to the characteristics of the cake. (I’m aware of the theory it applies to both, but it seems a missed opportunity to reinforce that when it says “bake in small tins.”)
I’m not saying it’s not a cupcake, I’m just saying… well, here:

See what I mean? If I ask for a cupcake, and you bring me a molasses spice-cake baked in a small tin, I’d think you didn’t understand the request.

But only one year later, we got a cupcake recipe we would recognize in a book called The Frugal Housewife by Lydia Maria Francis Child, first published in 1829:

Mind you, her cupcake was about as good as pound cake, in that it had no leavening in it and would be rather dense. (They did use potash as leavening at the time, and other cakes in the book were leavened.) It was cheaper in that, since pound cake involved equal measures of all ingredients, this used the least amount of butter, the most expensive ingredient at the time.

But we should stop to talk about the author for a moment; you might know her name as Lydia Maria Child, the civil rights activist, journalist, and novelist. 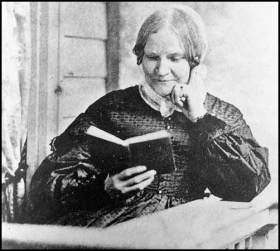 Lydia Maria Francis was born in 1802 in Medford, Massachusetts; she attended school to become a teacher while learning the classics from her older brother, a Unitarian minister. This was an interesting time to be a teacher, because the Panic of 1919 and subsequent depression in the 1820s would lead to the development of the public education system as part of a social safety net against poverty. (In theory.)

She started writing as a teacher. At 22, she wrote her first novel, Hobomok, anonymously, attributing it only to “an American.” In the novel, a white woman marries a Native American and has his son.

Let’s just say the novel was not well received. Shall we move on?

Two years later, in 1826, she started a monthly magazine for youth called Juvenile Miscellany. Then, in 1828, she got married to Boston lawyer (and eventually journalist) David Lee Child. Ultimately, both Lydia and David would be deeply involved in the causes of Native Americans’ rights and abolition–but in that early first year when learning to be a housewife, she wrote a cookbook.

Lydia’s The Frugal Housewife: Dedicated to Those Who Are Not Ashamed of Economy was the only cookbook she ever wrote. It was reprinted at least 35 times (usually under the name The American Frugal Housewife to distinguish it from an earlier British book). Ultimately, in the 1850s, it fell out of print, hypothetically in favor of newer cookbooks, although Child’s active work in then-controversial abolition movements was likely a contributing factor.

In part due to being popularized by Child, the 1-2-3-4 cake became a classic American yellow cake: easy to remember, rich, sweet, and always welcome at the table. Here’s a version from the November 18, 1870 edition of the Coshocton (Ohio) Age:

By 1891, this basic recipe was familiar enough to be repeated in the opening paragraph of a fiction piece in the November 26, 1891 edition of the Friendship (New York) Weekly Register:

Mmph. “Patties.” Well, yes, that happened. Another name for cupcakes in the 19th century (and still today in Australia) was a patty cake, although it’s not entirely clear that the 18th-century nursery rhyme referred to the same thing.

For example, consider this patty cake recipe from the July 27, 1899 edition of The Waterloo (Iowa) Courier:

moderate oven
Usually, 350 to 375 deg. F.
potash
Potassium bicarbonate or potassium carbonate. The bicarbonate is a leavening agent that is usually indistinguishable from sodium bicarbonate--baking soda--in the finished product. Use baking soda, although places that sell home brewing equipment often have the bicarbonate, if you absolutely must have potash.
saleratus
Baking soda. Traditionally, either sodium bicarbonate (what we use today) or potassium bicarbonate. From the Latin words sal, meaning salt, and aeratus, mening aerated.
quick oven
Generally, 375 to 400 deg. F.
saltspoonful (saltspoon)
A salt spoon was the spoon that accompanied a salt cellar, an open dish of salt, in the days before salt grains were processed to become "free-flowing." An exceptionally small utensil, it corresponds to 1/4 of a teaspoon when used as a measurement.