A story of weights and measures and death and taxes, in that order.

The original pound cakes were never really about having a pound each of eggs, butter, sugar, and flour. They were about having equal weights of them. British cooks in the early 18th century would weigh their eggs, then add the same weight of each the other ingredients.

I mean, if you think about it, trying to adjust to make sure you have exactly a pound of eggs is kind of asinine. Chickens, stubborn beasts that they are, refuse to lay eggs in measured ounces.

The original cakes were leavened only by the creaming of the butter and sugar, if at all; as chemical leavening agents became available, they were incorporated into the mixture, and the amount of butter reduced.

When you do the math, a British gill is actually 4.8 U.S. fluid ounces and a U.S. gill is 4 fluid ounces. Which I only mention because of King Charles I and the story of a novel variation on measuring twice and cutting once.

The story says that the Charles I went to Parliament to request an increase on the tax placed on a jack, which was two fluid ounces, or half a gill. When Parliament declined to assent to such a tax, Charles reduced the size of the jack, causing more jacks to be sold, and therefore more taxes to be collected. 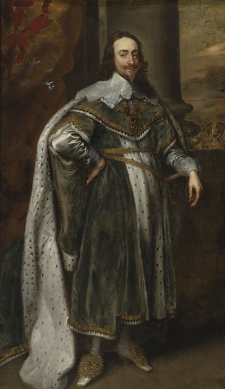 And this, says the legend, led to taunts in the form of the first verse of the nursery rhyme Jack and Jill:

Jack and Jill went up the hill
to fetch a pail of water;
Jack fell down, and broke his crown,
and Jill came tumbling after.

Get it? Reducing the size of the jack caused the size of the gill to “tumble after” and that broke his crown. And, in fact, you did pay for pails of water; many people had their water delivered by a person carrying buckets, called a cob, who was part of a well-organized and unionized group.

But of course, the story is completely absurd if you look just a little bit below the surface. For one thing, this isn’t how taxes were assessed in the 17th century.

A quick perusal of some of the contemporaneous Acts of Parliament shows how taxes were collected: there were subsidies, poundage, and tunnage. Subsidies were amounts assessed on everyone, hypothetically based on a valuation of property; poundage was an import tax, by weight; and tunnage was a flat tax on imports of barrels (named after the largest barrel, the tun, which held–by the Restoration, anyway–a little over 200 gallons).

Nowhere in the system of taxation was a sales tax. In fact, during the British Civil war, in 1643, it was Cromwell’s Parliament that passed an excise tax. And no, it didn’t measure in eighths of a pint.

The silliest thing is that the only tax system that actually involved any measure of volume–the tunnage–was on barrels being imported from other places–that is, people in countries with different measuring systems.

The French used a completely different system of volume measurements, including a pinte that was about 1.68 Imperial pints, and most commonly paid a tunnage on barrels that were actually about the size of a hogshead–around 52 gallons.

The fact that wine was shipped in barrels, then bottled in England, came in handy a few decades later. As weather would warm bottled wine the cellar in some parts of France, a second fermentation could occur, and those bottles would sometimes explode. But English glass-makers knew how to make thicker bottles than the French did, and were willing to pay triple for a fermented wine.

That didn’t impress the winemakers in Champagne, who wanted to compete with Bordeaux, and thus were working on ways to stop the bubbles from forming in their wine. But that’s another recipe…

Rub butter and sugar to a white cream. Add 3 eggs, 1 at a time, and the rest 2 at a time. Beat well. Add flour, sifted with baking powder.

Add extract. Mix into a smooth medium batter, and bake in a paper lined cake pan in a steady oven. 50 minutes.

steady oven
Sometimes used alone, to mean moderate oven, or 350 to 375 degrees; sometimes used to modify moderate or quick, where it means with as little temperature variation as possible.