A famous face in food, substituting for an anonymous legend.

As we’re often reminded, most white rice is made by removing the nutrient-bearing hull and is thus, in essence, an empty carbohydrate.

In the 1930s, British chemist Eric Huzenlaub thought of a method to change that, one that he called “conversion.” While still in the hull, Huzenlab exposed the rice to a vacuum, then steaming; the water-soluble vitamins in the hull were pushed into the starchy endosperm. The rice would then be dried and milled.

His initial goal was to set up mills in India, but when World War II broke out, the logistics became insurmountable. Instead, he joined Texas businessman Gordon Harwell and the two created a partnership called Converted Rice, Inc.

(Shortly after the firm was founded it was bought by Forrest Mars, the son of the man behind the Snickers Bar, who had his own little candy company he called M&M Limited. But that’s a story for another card and another brand name.)

There were a number of advantages to the new rice that appealed particularly to the military. Apart from the nutritional benefits, the rice cooked faster and had a longer shelf life. Converted Rice sold all of its rice to the military until 1946.

After the war, Harwell looked for a name more accessible to consumers. What he came up with was a legend. 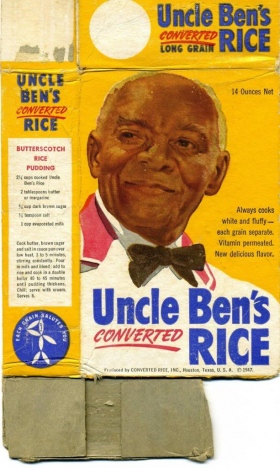 Rice was first introduced to Texas in the late 17th century, though commercial rice farming didn’t take place until the late 19th century. But among Texas rice farmers was the memory of a man they called Uncle Ben, a man who grew such exceptionally fine rice that farmers used it as a benchmark.

Some critics have pointed to the image on the boxes as having been designed to make Ben look like a servant, dressed in a bow tie.

As nobody knew who the real Uncle Ben was–and the only reason they knew he was black is that people called him “Uncle Ben,” with the uncle attached in the way such titles were used to diminish black people–Harwell asked a Chicago maître d’, Frank Brown, to pose for the portrait.

Prepare rice according to directions on box.

Poach 4 chicken breasts and cut into cubes, about 4 cups.

Thaw frozen cut beans in colander; pour boiling water over it and drain.

When everything is prepared, mix together in a large bowl.

Bake in a 9×13 pan. I found the mixture too much for regular 9×13 pan. Perfect for CorningWare roasting pan.