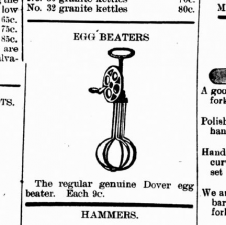 While we might imagine some evolutionary period between the wire whisk and the rotary beater, it was a very short evolution; wire whisk mentions show up in the 1840s, while the earliest patent on a rotary beater is J.F. and E.P. Monroe’s 1859 filing.

That patent was purchased by Massachusetts’ own Dover Stamping Company (which seems to have been located in Cambridge and Boston at various times); they produced a very popular line of egg beaters. So popular, in fact, that beating eggs with a rotary beater was sometimes called dovering eggs.

Why a knife? There was a peculiar belief in some quarters of American cuisine that the knife was preferable because it did less violence to the structure of the egg whites, because it cleanly cut the proteins rather than ripped them apart by force. Now we know that denaturing the proteins is an essential part of forming an egg white foam, and at any rate, the proteins come apart from being rubbed against each other, not from the shape of the beater.

Mix and sift flour and salt. Add milk gradually and egg to keep mixture smooth. Beat with Dover egg beater. Pour at once onto hot well-greased gem pans. Bake in a moderate oven from 40 to 45 minutes. Serve as soon as baked.

moderate oven
Usually, 350 to 375 deg. F.
Dover egg beater
An early rotary beater, popular around the late 19th century and early 20th century.
gem pans (gem pan)
A specific form of pan, sort of like a muffin pan, except with straight sides in the cups, spaces between the cups for air circulation, and traditionally made out of cast iron. The name comes from a specific variation of muffin made from whole wheat flour, often with fruit in it, called fruit gems. A muffin pan, a sheet pan with straight-side ramekins, or a sheet pan lined with ring molds might work as a substitute depending on the recipe.