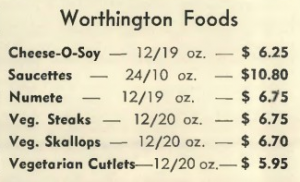 Cheese-O-Soy: Obvious, but I thought the advertisement in the picture was interesting because it shows that this was not at all an inexpensive product in 1965. That ad appeared in the September 21, 1965 edition of the The Lake Union Herald, a church magazine.

Vegetable salt: Most likely, this refers to a salt substitute that was made partially (or entirely) from vegetables. It’s not necessarily salt-free; it could just be reduced in sodium by having some amount of salt replaced with vegetable matter.

Sally’s Spread: based on the context in other recipes, I think this is a soy margarine.

Aminotone: a brand name for “hydrolyzed plant-derived protein intended to be used in foods as a flavor enhancer.”

To produce hydrolyzed plant proteins, hydrochloric acid is added to plant proteins, then neutralized with sodium hydroxide. The proteins are broken down into their amino acids.

The reason adding this to food makes food taste better is that glutamic acid is one of the resulting amino acids. Glutamic acid is the non-sodium half of monosodium gultamate.

Bring the above ingredients to a boil. Simmer for 25 minutes, then add: