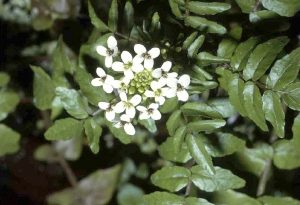 Watercress is a relative of the mustard plant. Humans have been eating one form of cress or another as far back as 485 B.C., when the Persian emperor Xerxes made it part of his soldier’s diet. Around 400 B.C., Hippocrates is said to have cultivated watercress for its health value. Around 50 AD, the Romans crushed it with vinegar into their salads. In the middle ages, it was prized as a supposed treatment for baldness. And in the 1700s, it was given the Latin name nasturtium officinale; the first word translates to “nose-twister” and the second indicates that herbalists cultivated it.

And despite it not offering much help for a receding hairline (trust me), it’s a powerful, pungent herb indeed. One hundred grams has only nineteen calories, but 2.2 grams of protein and a powerful nutrient punch.