From a very successful cooking magazine. 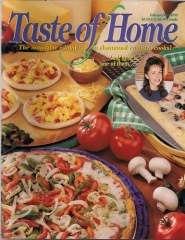 According to their website, this recipe originally appeared in the February/March 1999 issue of Taste of Home magazine on page 39. And I have no reason to doubt them, since they’ve been doing the good work of preserving American home cooking for much longer than I have.

Since then, I’ve bought a subscription to Taste of Home, but the first issue hasn’t arrived. I’m hopeful, though. I’d like to think that I’m not alone in trying to preserve and catalog American home cooking.