A two-layer molded salad with a ham layer and a cream layer. No, seriously, it is. I found a picture and everything.

A variation of this recipe appeared in the May 16, 1960 edition of the Lawrence Journal-World. 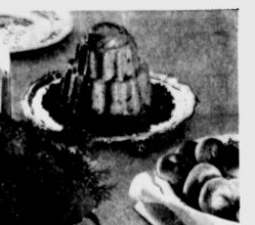 A picture of that variant of the recipe (which calls for cherry-flavored gelatin, among other tweaks) appeared in the Dec. 2, 1965 edition of The Milwaukee Journal.

The top layer is a delicate dome of sour cream. The bottom layer contains ham which makes it a good choice for a light meal at some holiday gatherings.

In a small pain soften gelatin in water. Stir constantly until gelatin is dissolved. In a small bowl gradually add milk to sour cream; add horseradish then gelatin. Pour into a 5-cup mold. Chill till just set.