You don’t often see this cut of meat in grocery stores these days. A round steak can be between one to three different cuts of beef, joined together around a bone, which may or may not be in place when you get the steak. 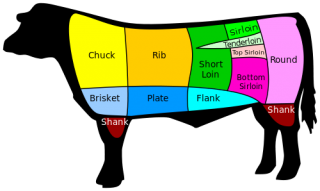 The round is an American beef cut at the rear of the animal, and the three muscles potentially involved in the round steak are the top round (sometimes called London broil in supermarkets these days), the eye of round (a popular cut for deli-style roast beef, and the muscle within a round steak that looks, well, round-ish), and the bottom round (also known as rump roast).

The actual number of muscles depends where along the round the steak was cut. The first few slices of round will be all top round, transitioning into eye and bottom round gradually somewhere around the fourth, fifth or sixth steak cut from the round (it rather depends on how thick you like your steaks and how tall the cow was). The closer to the top of the round the steak is cut, the more tender it will be; as it continues down the primal, the meat will get tougher and have more tendons. So that’s the bad news–like a Porterhouse steak, the different muscles that might be involved in this cut of meat will add a slight challenge to cooking them all properly.

There is good news, however. These are all basically lean, somewhat tough pieces of meat that lend themselves to slow cooking. So while it might be necessary to keep an eye on the pieces, treating them the same way with slow cooking (as in this recipe) is going to work. It’s also helpful that you separate the meat into serving pieces. If you look at the grain of the meat and separate the steaks properly, you should be able to isolate each muscle to itself more or less, and remove them earlier or later as you see fit.

That said, you can also probably imagine why we don’t frequently present round steaks at the grocery store anymore. If you want to avoid special ordering to make this dish, you can pick up an eye of round or a rump roast and simply cut half-inch steaks from that. The meal will be just as special. (I’d shy away from the top round, if only because it tends to be butchered with the grain, so your steaks will be long and skinny rather than steak-like.)

This recipe appeared in the March 4, 1965 edition of the Ellensburg (Washington) Daily Record.

Remove meat to a heated platter. Add sour cream and blue cheese to cooking liquid; cook until just heated through. Spoon over round steak. Serves 6.

Yesterdish suggestion: Like I said in the post above (just in case you didn’t read it and skipped to the main event), you can avoid having to hunt for round steak by getting an eye of round and slicing that into half-inch steaks.