The first weekly contribution from my own recipe box. After all, since I’m sharing everyone else’s family recipes, I guess it’s only fair that I do the same. 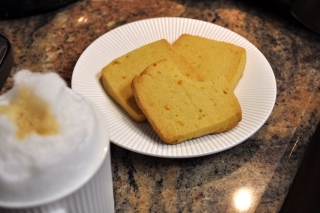 This is my absolute favorite cookie in the known universe. I love Thin Mints, but if a Girl Scout had the extraordinary misfortune to knock on the door at the moment I happened to be taking a tray of ginger squares out of the oven, not only would she not make any sales, she’d probably fork over all her proceeds in an attempt to order six boxes of ginger squares from me.

Explaining the magic of these cookies is difficult. They’re sort of a shortbread, firm, but supple rather than crumbly or crisp. It’s richer than cheesecake, but doesn’t compete with the flavor of your coffee; it tastes more of ginger than gingersnaps, but it doesn’t bite back the way gingersnaps do. And the orange zest is as powerful as the ginger, the two in balance, preventing the cookie from becoming overwhelming. 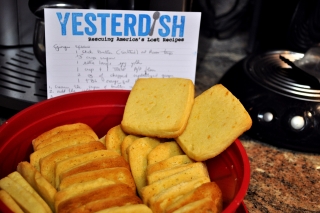 I don’t actually remember the first time my mother made these. Probably eight or nine years ago. As it turns out, my father and my sister don’t like the taste of ginger and don’t like these cookies. But my mother continues to make them for me. Speaking of family, the handwriting on the card here is my mother’s. I’ll show you my handwriting eventually, but I swear, when I write a recipe card, it looks like a ransom note. The photographs were taken by my sister. I realize the images are way too big for efficient viewing, but they’re just so gorgeous that I was disinclined to make them smaller.

Refrigerate until firm and sliceable. Pre-heat the oven: 350 deg.