Another riff on party mix, Texas Trash, you know the kind of thing. Or… do you?

For all of the obsession that people have with Chex Mix and having the “original” or “authentic” recipe, they’re all wrong unless they have shredded wheat in them.

But before we get to that, let’s start with the recipe on this card, which appeared in the August 8, 1954 edition of The Victoria (Texas) Advocate:

While Victoria, Texas has a population of around 67,000 today (and counting), in the 1950s, its population was closer to 16,000. I’m not saying this was a small town newspaper or anything, but you can click here to see the stories next to this one.

Now, the story we’re generally told about Chex Party Mix, brief as it is, is that the recipe first appeared on the cereal box in 1952 and it was an instant hit. Both of those things are more or less true. But there are two wrinkles to that:

Sketch of Webster Edgerly from the April 18, 1896 edition of the Ironwood (Michigan) News-Record.

I couldn’t possibly capture for you in this space the entirety of weirdness that was Webster Edgerly.

In fact, I’m going to put most of this section behind “click to expand” tags, because we would get seriously derailed trying to grasp the massive pile of oddity that is Edgerly. And I’m not even starting at the beginning.

We have to skip ahead — past his birth in 1852 in Massachusetts, past his series of failed marriages, past his law practice, past his move to the nation’s capital, and past his failure as an actor and playwright (during which he adopted the pseudonym Edmund Shaftesbury to attempt to convince people the author wasn’t also the lead actor).

But I wouldn’t be doing my job if I didn’t try to capture, at least a little bit, the truly odd ideas of this man.

Click here to expand an example of the ideas introduced in one Edgerly pseudo-scientific text. 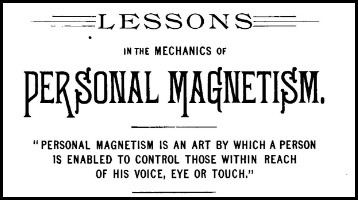 As his other passtimes fell away, he spent more time on the work of the Ralston Health Club, which he had founded in 1876. The Ralston Health Club would evolve into the Ralstonism movement, a combination of healthy living, dietary restrictions, and absolute outright insanity. It was free to become a Ralstonite, but the secrets of the movement would be revealed only in a series of books; the books were a dollar each (in 1890s money), and numbered about two hundred.

In 1896, Kate Swan with The New York World joined the Ralston Health Club to write an exposé on them. She particularly focused on how the “secrets” they revealed were either common knowledge or had no scientific basis, and on a made-up word, “glame,” which apparently is supposed to refer to some kind of self-induced euphoria the members could experience. She also mentioned how the club promised its members would live to 200.

Click here to expand some excerpts from the article.

Some excerpts from the February 23, 1896 edition of The New York World:

Autocorrect insists that by glame I mean either game or lame, and I can’t choose between those two. I should point out, by the way, that the supposed 11,000,000 members was Edgerly’s claim, and that the number was probably much lower.

But the most portentous comment in Kate Swan’s ribbing came in her mention of the suggested breakfast food for every Ralstonite:

Four months later, this ad appeared in the back of the June 1896 edition of Everyday Housekeeping:

To be fair to Edgerly, the idea had crossed his mind before. In 1895, ads appeared for Ralston Kaffee, a roasted grain breakfast drink (as Ralstonites were also supposed to abstain from coffee, tea, and liquor), sold directly by the Ralston Health Club. But even 120 years ago, it wasn’t that simple to bring a product to the mass market.

Fortunately for Edgerly, he didn’t have to. Two years before Swan’s expose, William Danforth of St. Louis had founded Purina Mills, a company that sold animal feed. Readers of a certain age no doubt remember Purina Puppy Chow; readers of a certain higher age might even remember ads for Purina monkey chow.

Even the monkey in this ad from the September 17, 1962 edition of the Washington (Iowa) Evening Journal doesn’t believe it.

By 1896, then, Edgerly had the problem that he couldn’t manufacture his breakfast food to scale; Danforth had the problem of expanding into human food after selling animal food (in hindsight, it might’ve been easier to try going the other way).

The result was Ralston Purina Cereals. The original “Ralston Breakfast Food” was a hot milled wheat cereal, which is a polite way of saying gruel. From there the line expanded to grits, oatmeal, pancake flour, and beyond.

But the cereal we’re interested in — Shredded Ralston — doesn’t show up in advertisements until the mid-1930s. So Webster Edgerly never had it, because he died in 1926. That makes him about 74, which would be an impressive age for the day, if he hadn’t promised to know the secret to living to 200.

In the modern mega-corporation world, companies know the best way to get all of your dining dollars is to offer a range of products that appeal to your varying tastes throughout the day. But in the first half of the 20th century, the way most companies did it was to convince you that you wanted to eat the product they made all the time.

Ralston didn’t invent this; nearly every food manufacturer of the day attempted it to one degree or another, a practice maybe most recently remembered for the "drink Dr. Pepper hot!" campaign in the 1960s.

But what makes Shredded Ralston/Wheat Chex stand out is how long the company pushed one specific application: buttered, salted, and served a snack. From the February 3, 1938 edition of The Big Spring (Texas) Daily Herald, this suspiciously un-bylined or -datelined piece is the earliest I’ve found so far:

Here’s a magazine ad and recipe from around 1940, which points out that Shredded Ralston is “not rationed!”

This 1947 reproduction (sorry, can’t find the original, but someone’s put it on a metal sign on eBay) omits the quantities of butter and salt to use in favor of the serving suggestion of stuffed celery and pickle chips.

And on the 1954 Wheat Chex box — the one on the shelf the same year the recipe on this card was printed in the Texas paper — there’s another iteration, this time with celery seed or poppy seed as an option:

There are dozens of other examples, but you get the picture.

So when did Wheat Chex become, y’know, Wheat Chex?

As opposed to shredded wheat, I mean. And on that, I’m not entirely sure. In 1960, the ads still show shredded wheat. By 1970, the commercials show modern Wheat Chex. I’ve reached out to General Mills to ask if they know, but who knows if I’ll hear back.

But one thing is clear: in 1952, when the “famous” “original” Chex party mix recipe appeared, Wheat Chex were shredded wheat.

From the box of H.P., sold in Paradise, Arizona.

Break pretzel sticks into even smaller pieces and mix with peanuts and both dry cereals.

Heat butter until melted and stir in the Worcestershire sauce, garlic [salt] and various salts. Pour over cereal mixture and mix well.