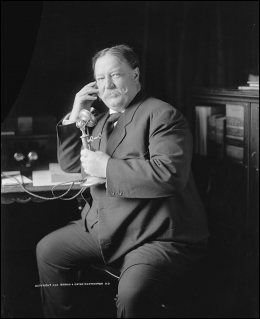 William Howard Taft was the 27th president of the United States, serving one term between 1909 and 1913. The son of a prominent Ohio family (his father had been Secretary of War under President Grant), he went to Yale for his undergraduate education, then got his law degree back in Cincinnati.

By 32, he was Solicitor General of the United States, appointed by President Harrison; then he was Theodore Roosevelt’s Secretary of War between 1904 and 1908; and finally, accepted the party’s nomination to be the Republican candidate for President in 1908.

At this point, to genuinely understand Taft, we have to pause and talk about who he really was. Taft was not a politician. He didn’t have the eye for nuance that made Teddy Roosevelt a beloved favorite. He was about as delicate as his then-320-ish pound frame would suggest, but at the same time, lacked the kind of motivating fire that pushed his predecessor. In short, Taft was an academic who was more or less pushed by his party (and his wife) into the presidency.

Taft’s ambition was to be on the Supreme Court, and ultimately, he took that as a job a few years after he lost his bid for re-election, from 1921 to 1930; he died a month after retiring from the Court that March.

As a lawyer, I’d be remiss if I didn’t point out that I don’t think Taft was a particularly skilled jurist, either. He was obsessed with the minutia and procedural aspects of the bench, but felt that the authority of the court was strongest when it was united, and was therefore inclined to vote with a majority wherever he could find one (although there are some notable exceptions). Particularly galling to me was his inclination to take a narrow reading of the Fourteenth amendment, suggesting that due process meant freedom for companies rather than rights for individuals.

(For example, he wrote the opinion in a 1922 decision striking down a tax on companies that used child labor. Ultimately, in 1938, Congress just prohibited the transportation of goods across state lines made from “oppressive child labor,” which was enough, given that most states had by then passed their own laws prohibiting the practice.)

In short, while I don’t think he was a bad person, I think Taft was too damn rich for too damn long to be any damn good as a judge.

So how does this figure fit into our cake? The earliest mention of Taft cake that I could find was in the March 14, 1913 edition of the Boston Post:

It has very little in common with this version from the January 24, 1914 edition of The Covina (California) Argus:

Here’s a version that appeared during Taft’s stint on the Supreme Court. From the May 9, 1925 edition of the San Antonio Light:

Could it be based on a favorite of President Taft’s? Well, let’s check in with his Aunt Delia. From the December 29, 1910 edition of the Grand Traverse Herald, Traverse City, Michigan (from an interview originally conducted by the Denver Post):

One recipe sort of resembles the 1913 Taft Cake and the one on our recipe card.

Well, there’s another possibility, and this one would make the fruitcake option more likely. From the December 26, 1911 edition of the Warren Evening Mirror:

There’s not much information on Hattie Brandenburg out there; there was a Hettie Brandenburg who would’ve been in her 40s in Dallas at the time, but other newspapers say it was a Hattie Brandenburger from San Antonio. And anyway, before we go too far down that path, we should take note that Taft has a history of this maneuver.

From a 1908 edition of Good Housekeeping, we see him using the same trick when he was Secretary of War under Theodore Roosevelt:

Hmm. “Devil’s fruit cake” sounds like it could have chocolate in it, but Good Housekeeping didn’t share the recipe.

For that, let’s visit the March 19, 1911 edition of The San Francisco Call–where we’ll find chocolate and enough booze to make anyone jolly (note Taft in the illustration):

So as it turns out, yeah, it’s entirely possible that two separate fruitcakes took the name “Taft cake.”