Well, this certainly would be, uhm, fragrant. 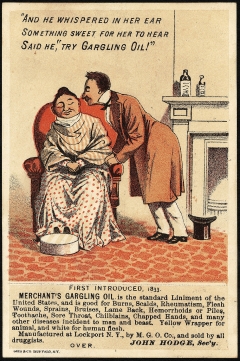 If you’ve got designs of going back in time to be a cook in a 1930s farmhouse, an 1860s chuck wagon (which we talked about in the post for chuck wagon casserole from Winston-Salem, North Carolina), or anything in-between, you’re going to know how to mix together a liniment. Just as barbers were once doctors, cooks were expected to be compounding pharmacists.

As a category, liniments are intended to do two different things. One is to change (usually increase) the friction between a hand and the part of the body it’s rubbing–today, we’d use massage oils to lower the friction or rubbing alcohol to increase the friction. The other is to offer some kind of neuralgic pain relief, which is to say, some kind of topical sensation that tricks nerve endings into sending fewer pulses of pain about an over-worked body part. Today, we’d use a mentholated cream like Icy Hot, in all probability.

So a farm family, for example, might rub each other’s sore back with liniment to increase the massaging effect while offering some topical pain relief. These days most “muscle rub” products smell like one of three things: menthol (because that’s the active ingredient in some), wintergreen (because methyl salicylate is the active ingredient in others), or a sort of nonspecific undertone of chili (because low-dose capsaicin products are available, although it’s not clear that they work). But on the farm or on the trail, the presumption was that the worse a liniment smelled, the harder it worked.

Consider this formulation from the December 3, 1926 edition of The Lima (Ohio) News:

Most of these things are still used in liniment-type preparations today–even turpentine, in some cases, though maybe not in this concentration. Effective? Mmm, probably, on small areas. Over-use would likely lead to blistering. But remember, the amount of pain something caused topically was considered a sign of its efficacy. Commercial liniments of the late 19th century included brand names like Hornet’s Nest and Barbed Wire.

I think I’ll stick with this:

This recipe is from the 45th page of the notebook; here’s the page in full (click to enlarge).

Equal parts of each: