An obscure brand of a popular sugar substitute. 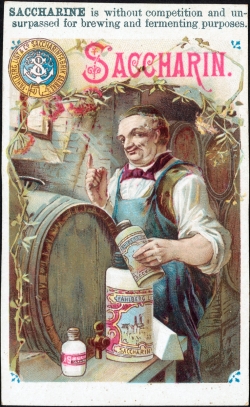 We’ll have to have a proper post about the history of saccharin at some point, but there’s too much to talk about tonight, so here’s an abridged version of how saccharin came into being.

In the 1870s, Russian-born chemist Constantin Fahlberg was working in Ira Remsen’s lab at Johns Hopkins University, where the two were exploring coal tar derivatives. One night, depending on which version of the story you believe, Fahlberg ate a roll or smoked a cigarette that tasted sweet and metallic; he realized that he hadn’t washed his hands after work and he was tasting benzoic sulfilimine, created by heating a mixture of a benzene derivative, an acid, and a few other compounds. Fahlberg and Remsen co-authored papers on the substance, but Fahlberg patented and manufactured it alone, selling it as a substitute for sugar.

So on to the real subject of these recipes, H.G. Marshall.

Harry Griffin Marshall was a character, from what old newspapers can tell us. He started as a door-to-door salesman selling patent medicine. From the July 6, 1901 edition of the Newark Advocate:

Mmph. Well, 15 years later, the Dr. David Kennedy Company pled guilty to mislabeling their bottles (the company was owned by the sons at that point, and the product sold for a dollar a bottle). You see, they claimed the remedies contained medicine. Instead, according to the U.S. Department of Agriculture:

At 18% alcohol, Dr. Kennedy’s remedy was about the same proof as highly fortified wine, like Thunderbird’s higher-alcohol version–but to be fair, the dose was three teaspoons a day.

Marshall’s door-to-door career ended in 1910 when he took a job at Erman & Son’s pharmacy. In 1912, he opened his own shop on East Main Street. (It’s likely the street numbers have changed since; as it is now, the businesses closest to the numbered location are a drive-through liquor store and a hunting supply store.)

While he might’ve left knocking on doors behind, patent medicines remained his trade. Consider his offering from the March 21, 1913 edition of the Newark Advocate:

On December 15, 1915, George H. Mayr pled guilty to misbranding his stomach remedy by claiming it contained medicine of any kind. The package was actually a combination of oils and salts that, when combined in the digestive system, solidified–and the result was the the “kidney stones” and “toxins” that the product was supposedly flushing out.

But onward, if not upward. As a man with a shaved skull described as a “gleaming beacon of hope,” I’m not even going to comment on the trade Marshall offered in the August 14, 1916 edition of the Newark Advocate: 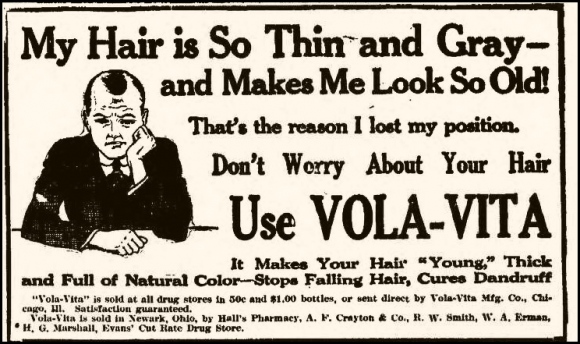 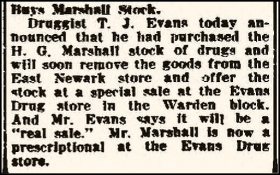 H.G. Marshall’s time as a shop owner ended in 1917, when he sold the business to a competitor and became an employee at the new owner’s store. And to explain what happened next, we need to stop and talk briefly about what happened in the years following saccharin’s invention.

In the late 19th and early 20th century, saccharin was much cheaper than sugar, both because it was 300 times sweeter and because sugar involved a lot of shipping, while you could produce saccharin more or less anywhere. Around the turn of the century, some beverage-makers started using saccharin instead of sugar and not telling anyone, strictly as a cost-control measure. 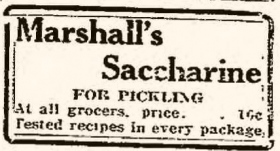 As the public became aware of “adulterated” foods in the first decade of the 20th century, saccharin’s supporters (the business world) and detractors (nervous chemists who didn’t have any particular hard evidence, but felt that coal tar extracts couldn’t possibly be good for you) pushed back and forth politically.

For a long period of time, including the time when Marshall started making his saccharin, it was legal to sell saccharin to consumers for use, but illegal to use it in any manufactured product, because doing so would reduce the “food value” of the product. “Food value” means calories–it’s precisely the lack of “food value” that would lead some doctors to prescribe saccharin, including Teddy Roosevelt’s, at least according to one anecdote. 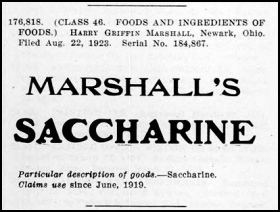 So in 1919, Marshall started selling his saccharin, and in 1923, he registered the label with the Patent and Trademark Office. This was the insert from the package. And for the first time in his adult life, Marshall was engaged in the sale of a chemical compound that did exactly what the label promised.

So how much should you use? Generally speaking, a saccharin pickles recipe would call for a tablespoon of saccharin to a gallon of vinegar, so I’m guessing each “package” of Marshall’s product was a tablespoon.

Oh, one last thing. “Mangoes.” In Ohio and other parts of the Midwest, that’s a term that was used to bell peppers. The only explanation I’ve found is that early Americans received pickled mangoes; the name mango came to mean anything pickled; and bell peppers were pickled, too. Plausible.

That said, I’m sure the recipe would be lovely with actual mangoes in it, too.

Always use cider vinegar when possible. Poor vinegar often spoils what otherwise would have been delicious pickles.

Strong vinegar should always be weakened with water, if it is not, the vinegar will cause pickles to become soft, and eventually eat them up. One pint of water to a gallon of vinegar is about right.

To insure best results always use Marshall’s Saccharine which is of the finest grade and guaranteed neither to ferment or turn sour.

One gallon vinegar will cover 100 small or medium sized pickles. A three gallon jar is just a nice size to hold these.

When making pickles by cold process always press a plate or round piece of wood on top of pickles to keep them under vinegar, using a stone weight to hold it down.

Be sure and use good spices. Mustard, cinnamon and other spices when kept in containers that are open to the air soon lose their strength and are worthless.

If sweeter pickles are desired than what recipes make, use two packages of Marshall’s Saccarine [sic] instead of one.

Keep pickles in a cool place.

Marshall’s Saccharine
is never sold in bulk, but only in original packages.Put Up By H.G. Marshall, Registered Pharmacist, Newark, Ohio.