From Texas with love. 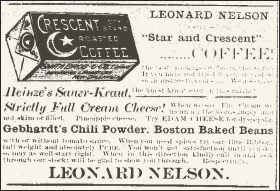 Nobody is sure who actually invented chili powder, but there’s pretty strong evidence about who commercialized it first.

In the 1890s, William Gebhardt operated a cafe attached to a saloon near San Antonio and faced an obstacle in providing chili con carne to his clientele. Chile peppers were only harvested at the end of the summer, making chili a seasonal dish. Gebhardt imported peppers from a Mexican city 500 miles to the south, then ground them in his home meat grinder three times. Ultimately, he moved on to a finer grinding system, and added cumin, oregano and black pepper.

He offered this to the public under the name “Tampico Dust.” Not particularly catchy, and not even particularly accurate, because he was importing his chiles from San Luis Potosi, an inland city 200 miles West of the port town of Tampico. But in 1896, he switched to the catchier name of Gebhardt’s Eagle Brand Chili Powder. And it’s still sold under that name, although the company has changed hands a few times (at one point, it was owned by ConAgra).

Mix all ingredients together thoroughly and use in place of chili powder.