Watergate salad is a mixture of crushed pineapple, miniature marshmallows, whipped topping, nuts, and pistachio instant pudding mix. The name is derived from the Nixon-era scandal involving a 1972 break-in at the Watergate office complex, leading to Nixon’s 1974 resignation.

That’s the easy part. The hard part is avoiding the misinformation that’s out there. Most sites say something like this: “Kraft (or really, General Foods, which merged with Kraft in 1990) introduced a recipe in 1975 with its new pistachio-flavor pudding mix and someone called it Watergate salad and then people called Kraft for the Watergate salad recipe and that’s how it happened.”

I don’t suppose you’d take my word for it that this explanation of the origin is wrong?

More sources? Fine, let’s take a look around. Among the strange things people have said about this recipe: 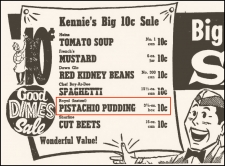 Sorry–Royal Instant Pistachio Pudding had been on the market since 1966–see the image to the right? That’s an ad from the May 19, 1966 edition of the Gettysburg Times.

Maybe you were thinking of Jell-o’s mix? Much closer, but the timeline isn’t quite right. Then again, I can’t put that on the author, because Kraft–current owner of Jell-o–doesn’t seem to have the timeline right, either.

But to be fair, it’s just one spokesperson from the 1990s. It’s not like Kraft is out there claiming it invented this recipe right now or anything…

Let’s put aside for the moment the fact that I can find no record of a pistachio pineapple delight recipe. Let’s put aside the fact that would be an exceptionally strange name for a recipe that doesn’t have chocolate, since pistachio delight was the name of a flavor of ice cream that had chocolate ice cream and pistachios in the 1950s and 1960s, after a soda fountain sundae from the 1930s and 1940s.

Let’s just focus on this: if this pistachio pineapple delight recipe was invented to accompany a product that launched in March of 1976, then why were so many versions floating around in 1973 and 1974? For example, this recipe in the November 5, 1973 edition of the Oil City, Pennsylvania Derrick?

(Click to expand more examples of this recipe before the name attached, or don't, if you get the picture.)

Or these versions, from the October 28, 1974 edition of the same newspaper:
The earliest mention of the words “Watergate Salad” that I could find might explain how the name got attached to a pre-existing recipe. It’s from the syndicated column of John Keasler, where he’s cracking some jokes about Nixon’s price controls over food and the White House’s austerity measures.

From the copy in the April 5, 1973 edition of the Thomasville (Georgia) Times Enterprise:

Get it? You cover it up and stick it on ice (in the sense of “to postpone dealing with something”). Watergate salad does, after all, look like something you stuck in the back of the fridge and forgot about.

As for the Watergate cake, that was an existing recipe, too. Here’s an example from the August 2, 1973 edition of the Spirt Lake (Iowa) Beacon from a column titled Between Us Girls (B.U.G.):

As for the name, there’s a mention of a “Watergate tape cake” in the February 8, 1974 edition of the Indiana Evening Gazette at a school event where students portrayed different presidents, but there’s no indication that’s the same thing (another example of a recipe listed in the piece was LBJ hamburgers, which isn’t a thing).

Other than that, the earliest mention of Watergate cake that I can find comes from the September 5, 1974 edition of the Hagerstown, Maryland Morning Herald:

Which creates a slightly confusing situation, because the Watergate name doesn’t appear to attach to the salad until 1975.

So for those who are keeping score, here’s the whole timeline:

Mix well. If it seems too thick, add some pineapple juice just before serving.

Recipe from the kitchen of Hilda Hoadley.