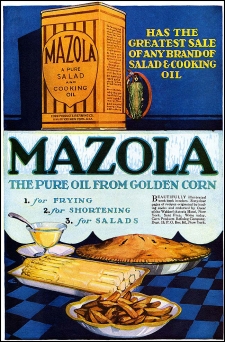 This is actually a recipe that was used in Mazola advertising (and at some point on labels) between the late 1920s and at least into the mid-1960s. (For a Mazola commercial from the 1960s, see the post for melting moment cookies.)

During World War II, ads promoted the recipe as a way to save butter rations. The earlier versions were made with water; around the mid-1950s, Mazola switched to a recipe that used milk.

Here’s a reference to the “new” method from a household hints column in the May 6, 1955 edition of the (Reno) Nevada State Journal:

The recipe itself appeared in the November 3, 1960 edition of the Uniontown (New York) Evening Standard:

Combine flour, sugar and salt in 9-inch pie pan. Mix with fork. Beat oil and milk together with fork; mix into flour mixture until evenly dampened.

Press with fingers in even layer over bottom, up sides, and partially over rim. Flute edges. This is a rich crumbly crust.