I know when it’s from, but not what it is. 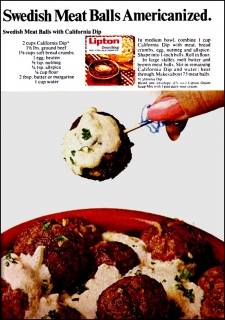 A list of ingredients like this was pretty common in the 1970s. So common, in fact, that without more context, I’m not sure what this recipe was intended to be.

Lipton’s Onion Soup Mix was only on the shelves for two years before California Dip debuted in 1954, and from there, it was a combination bonanza. While most of the television commercials of the 1970s focused on their individual serving packets, by the 1980s, they refocused on the onion soup mix and how it can be added to [food] to make souper-[food].

But that’s not this recipe, obviously. So what is it? Perhaps it’s intended to be a version of this recipe from the March 14, 1971 edition of the (Mansfield, Ohio) News Journal?

One wonders where Mrs. Davis normally put her dinner, if identifying that this one was in a dish was distinctive. In my imagination, the answer is, “a sombrero.”

Or is this not a casserole at all, but more of a sauteed dish, like this one from the April 27, 1976 edition of the Middletown (New York) Times Herald Record?

Or is it neither casserole or saute, and more of a roasted stew-in-a-package, kind of like this roast recipe from the August 18, 1972 edition of the Oskaloosa (Iowa) Daily Herald?

For more on Lipton soup mixes and the Lipton company, see the post for chicken with rice.