The back of the card has some useful info, too. 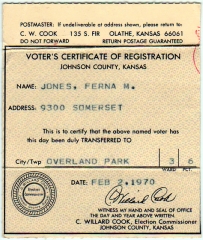 Here’s the back of the card. I guess since you’re this far deep into Ferna Jones’ history, I should tell you a little bit more. It’s also a little window into the process of doing recipe detective work.

So based on this card, my first culinary question: why wouldn’t there be more ingredients in the meatballs? The largest ethnic group to settle around Kansas City was German, and German meatballs generally have breadcrumbs in them. Maybe it means nothing; maybe it’s just a recipe she copied from a magazine. But let’s see what learning a little bit more about Ferna tells us.

Notice the letter with a line over it? I know it looks like an ‘e’, but I believe it’s a letter ‘c’ with a fancy loop. That’s because the c with a bar over it means “with” in medical shorthand, and ‘e’ isn’t used in that way. (We talked about medical shorthand in the post for broccoli hot dish.)

Is there a Ferna Mae from Kansas with a medical background? The 1940 census had one:

Meet Ferna Mae Kafka, who in 1940 was a 19-year-old nursing student in Kansas City, Kansas, living in what seems to have been a residence for nurses. (The crossed out part of the second image are the responses to whether the person was employed or not; the nurses initially seem to have answered no, because they were looking for other jobs, but then the answers had to be changed to yes, because they were paid for their working hours.)

For more on her family history, let’s peek back ten more years at the 1930 census.

Aha. Ferna’s father, Frank Kafka, was born in Czechoslovakia. If you’re curious, he was a blacksmith and owned his own shop. The $3000 is the value of their house, which was modest, but indicated the family was weathering the economy better than their neighbors.

While Czech meatballs would ordinarily be made with pork, they share something in common with all Eastern European meatballs, including kofta (which we met in the yogurtlu kebab recipe): they don’t use starches in the meat mixture. Some places rolled their meatballs in flour before frying, but not Czechoslovakia.

So’s entirely possible that Ferna grew up with a starchless meatball, and that was her preference.

And in the 1940 census, also in Kansas City, we meet 19-year-old Roy E. Jones, a between jobs dairy worker. In this context, “utility man” simply meant a laborer with no specialized skill set–they’d do lots of different jobs, specializing in none. 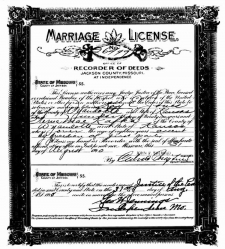 How exactly these two met, I’m not sure yet, but by August of 1940, they were married by a justice of the peace across the state line in Missouri.

Why Missouri, you ask? I can only speculate that it’s possible they eloped. At present, anyway, Kansas has a three-day waiting period for marriage licenses, while Missouri has no waiting period.

As a footnote to this story, it does appear that Roy found work in the next few years. I’m fairly certain that, by 1944, he’s the Roy E. Jones who was working in Penalosa, Kansas. While that’s a ghost town now, during World War II, it was an important rail stop for moving grain.

Roy was classified as II-C by the Selective Service Board, meaning he was considered an essential agricultural worker.

So nice to meet you, Ferna and Roy; now, back to our recipe. While the date on the card is 1970, this looks like a 1960s-era version of cocktail meatballs. In the 1970s, cocktail meatballs were being served as part of a fondue. There is one thing we could do to these meatballs to make them even more classically 1960s, however: set them on fire.

Here’s a version of cocktail meatballs from the September 17, 1964 edition of the Janesville (Wisconsin) Daily Gazette. It’s from Jacque Kimmel Shafer, Miss Wisconsin USA 1953, who entered the (Long Beach, California) Press Telegram Cookbook Contest in 1964. The recipe placed first in its division, Flaming Foods. (Can’t make this stuff up.)

Season finely ground chuck with salt and pepper, a little grated onion. Form into balls the size of cherry tomatoes and freeze in amounts of 12s or 24s.

When ready to serve heat in saucepan equal amounts of chili sauce and plum jam. Add meat balls and simmer until thoroughly heated through. Transfer to chafing dish.

Yesterdish suggestion: Assume a pound of beef per dozen meatballs.