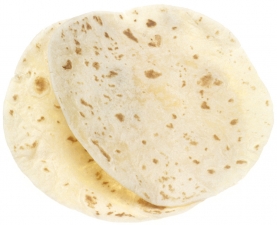 Have you ever called these “flour tortillas” and had the experience of someone correcting you and saying they’re wheat tortillas, because “corn tortillas are made from corn flour?” Here’s some useful information you can use to shut that sniveling ninny up.

The process of making corn tortillas has changed very little since the Aztecs. Dried corn kernels are soaked and then heated in an alkaline solution that dissolves their hull, kills fungus, and changes the chemical structure of the corn (by adding niacin and calcium and bringing the proteins closer to balance, among other things). The process is called nixtamalization (not exactly user-friendly, I know, but this is what happens when you let the Aztecs name things). The result is a product the aztecs called nixtimal, although we know it better by the Powhatan Indian name, hominy.

The hominy is then ground and cooked again, then kneaded into a dough; the other ingredients are added to that dough, which is rolled out into tortillas. This is the same process used today by large commercial tortilla makers, restaurants, and home cooks who prefer real masa tortillas.

So first of all, no, corn tortillas are generally not made from flour of any kind.

Second, while masa flour does exist (called masa harina), it wasn’t invented until 1908 using a process patented in 1909 by a San Antonio corn miller named Bartolo Martinez. Even then, it was sold primarily to migrant workers during harvest season, and wasn’t widely available until the late 1940s. There’s no question that the use of wheat in making tortillas predates that; references to wheat tortillas being prepared are in newspapers over fifty years older than masa harina.

(Yes, dried ground corn existed earlier than that, but you can’t make a tortilla out of corn until it’s nixtimalized; wet cornmeal turns into a slurry, not a dough. Makes a heck of a cracker, though. And there was no nixitimalized corn flour until Bartolo Martinez.)

Finally, even the fact that it’s possible to make a tortilla out of a dried corn flour doesn’t make it a co-equal competitor for the name “flour tortilla.” It’s like insisting that we shouldn’t use the name “instant coffee” to describe freeze-dried coffee crystals because, a few decades later, someone decided to invent a machine that makes real coffee instantly. Except instead of a few decades, make it millennia, and instead of being a machine that makes better coffee, it’s a process that makes slightly less delicious tortillas.

So, no, “flour tortilla” is a perfectly fine way to refer to a wheat flour tortilla. Pffft. If you told an Aztec you were making a “corn flour tortilla” they’d look at you like you’d lost your marbles. And then probably scream because you’re clearly some kind of a time-traveling demon. But first, they’d give you a look.

Too long, didn’t read? Fine. The next time someone says it’s wrong to call these “flour tortillas,” just direct them to Yesterdish.com, and then say this…

You’re going to use about 2/3rds of a cup of warm water, give or take; add slowly and adjust for humidity as you go.