“Dunkin Hinds?” I think I’ve seen that movie on late-night cable. But I think she means Duncan Hines.

We’ve seen all kinds of people with their name attached to food:

To that pantheon, friends, allow me to add our good friend Mr. Hines.

Duncan Hines was born in 1880 in Bowling Green, Kentucky. By the early 1900s, he worked as a traveling salesman for a Chicago printing company. Now, traveling salesman was a dangerous job–not because of the risk of robbery, or car accidents, or even farmers with shotguns chasing you away from their daughters; it was dangerous because it meant visiting a lot of restaurants you’d never heard about.

Remember, we didn’t even inspect slaughterhouses until 1906. The Food and Drug Administration didn’t exist until 1931 and didn’t have authority to regulate food handling until 1938. A recent Chicago Tribune article has a telling quote: “As Duncan Hines liked to say, more people died of restaurant food poisoning than hit-and-run accidents,” says Louis Hatchett, of Henderson, Ky., author of the biography “Duncan Hines: The Man Behind the Cake Mix.”

So Hines started to keep notes about the places he ate, if he thought they were any good.

Meanwhile, in 1931, a student named Roy H. Park graduated from North Carolina State University with a major in business administration and a minor in journalism (in fact, he’d extended his studies so he could serve as editor-in-chief of the student newspaper, Technician). Park got a job marketing cotton products.

Park’s Technician expertise helped him put out magazines to promote cotton and the interests of the North Carolina farmers who grew it. One of these magazines, Cooperative Digest and Farm Power, caught the attention of the founder of an Ithaca, New York based farm product cooperative called the Grange League Federation. In 1942, the GLF hired Park. 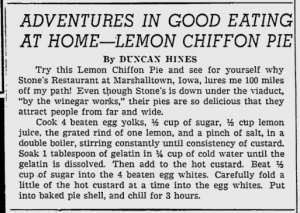 While Hines was becoming a savior to both famished motorist and harried housewife, in 1949, Park was tasked by the GLF to come up with a way to market surplus agricultural products. Park had the idea to ask Hines to lend his name and image to the marketing of consumer goods made from the surplus products.

In 1951, Hines-Park Park Foods, Inc. launched a line of products that included, among other things, canned vegetables, ice cream, and cake mix. By 1956, Proctor & Gamble bought out Hines-Park; the name is now owned by Pinnacle Foods Group, which also owns Birds-Eye, Swanson, Vlasic, and Open Pit.

Hines died of lung cancer in 1959. Park, for his part, took the money from the 1956 sale and went back into media, founding Park Communications, which went on to control 22 radio stations, 10 television stations, and 41 daily newspapers, as well as over 100 other publications. Park died in 1993.

Something to think about. Not bad, for a business and journalism student from North Carolina, or the second cousin, twice removed, of a confederate spy from Kentucky.

Sprinkle Jell-o mix over cake mix. Add Wesson Oil and water and mix (half at a time). Add one egg at a time and beat well.

Bake 45 minutes at 350 deg. in layer or tube pan. After cool, punch holes in cake with an ice pick or fork, then pour orange mixture over cake.

Some use lemonade and two cups of powdered sugar for the top.