This is actually a pretty traditional French dressing. Although to an extent that depends on what you think “traditional” means.

See, the original French dressing, conceptually speaking, was a simple vinaigrette with garlic or onion. Consider these instructions from the Nov. 4, 1915 edition of The Milwaukee Sentinel:

An article in the March 1, 1957 St. Petersburg Times titled “‘French’ Dressing Could Alienate Ally” observes how far the then-contemporary concept of French dressing diverged from the original: “Congress, if not in the spirit of fair play, should see to it that this mongrel mixture that passes for salad dressing in planes, trains and most American restaurants should be forcibly restrained from the use of the word “French” in its nomenclature.” (I do urge you to follow the link and read the whole thing. It was clearly written by someone who shares my sense of self-control and proportion.)

Well, fair enough. So what happened?

Most of the earlier tomato French recipes seem to call for condensed tomato soup, like this one from the August 24, 1940 edition of The Virgin Island Times. That makes me think it has something to do with emulsification.

The current Campbell’s condensed tomato soup label lists tapioca starch and xanthan gum as ingredients. Whether these were present in the early 1900s or it was some other emulsifiers and thickeners, they would serve to make a vinaigrette that doesn’t separate the way the traditional French dressing would if permitted to settle. (In fact, the vinaigrettes of the 1920s to 1960s were often prepared tableside, which could pose a problem at a potluck). 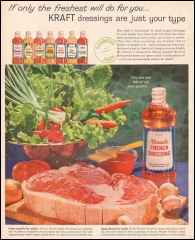 This article in the Evansville (Indiana) Courier-Press from last year speculates that Kraft’s 1925 introduction of a French dressing with tomato was what led down the tomato path. Maybe, but the dressing Kraft introduced, Miracle French, was still translucent, and remained so through the 1960s.

Use equal parts of vinegar, sugar, catsup, oil and a pinch of salt. This becomes more tasty after it stands a few hours. I find using just a little more vinegar is better.

saltspoonful (saltspoon)
A salt spoon was the spoon that accompanied a salt cellar, an open dish of salt, in the days before salt grains were processed to become "free-flowing." An exceptionally small utensil, it corresponds to 1/4 of a teaspoon when used as a measurement.