Sometimes, dating a recipe is difficult. This isn’t one of those times.

Here’s the back of the card:

Based on the contents of the box, I’m pretty sure that this is our Gertrude Alice Young in Kansas in the 1930 census–after marrying her husband Floyd Howard Sellers, that is:

Being listed in the census as a “laborer” most likely meant that Floyd worked loading or unloading train cars. Farm laborers were typically identified as farm workers, and Bentley, Kansas, was a railway stop on the Kansas Midland Railway (named after Orsemus Hills Bentley, a Wichita lawyer who sat on the railway’s board at the time the town was laid out in 1888).

By the 1940 census, the family was in Colorado, and Floyd had found a new line of work, as a janitor for a Works Projects Administration sewing room:

The Works Projects Administration (which started in 1935 as the Works Progress Administration, but was renamed in 1939) is something most Americans are familiar with: in 1935, as part of President Franklin D. Roosevelt’s “New Deal,” the U.S. Government employed millions of out-of-work Americans, doing jobs that varied from art and music projects to rebulding bridges and construction work. 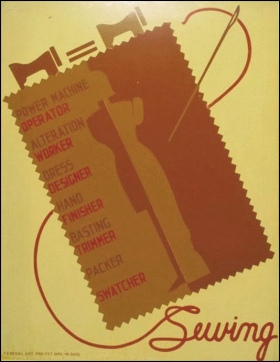 The sewing rooms, however, are sometimes overlooked. Nationwide, about seven percent of WPA workers were women working in sewing rooms–creating new clothing out of cloth and thread provided by federal and state governments in partnership (states were expected to foot about a third of the bill, recognizing that the work of WPA workers was going to generate local benefits).

Garments made by WPA sewing room workers ran the gamut from diapers to overalls. All of them would be tagged with the state of the sewing room and the words:

The WPA sewing rooms were ultimately shut down by… well, Rosie the Riveter, although we didn’t use that phrase until a year later. By 1941, with so many women needed to fill jobs left vacant by drafted or enlisted men, the WPA sewing room program was discontinued. Two years later, the WPA itself was shut down, the war having generated so many jobs that the unemployment problems of the 1930s were, more or less, resolved.

Floyd passed in 1979 and Alice followed in 1988. The couple is buried in Toronto Cemetery in Toronto, Kansas.

Which really just leaves the question: if Gertude passed in 1988, why are there a couple of recipes in the box clipped from more recent publications? My guess is that her sister, Hazel T. Parks, took over the box until she passed in 2008. Hazel was a member of the American Rosie the Riveter Association, and her membership status as a “Rosie” meant that she had been employed either directly in the war effort during WWII or in a capacity normally reserved for a man.

Mix and put in loaf in pan. Let set overnight. Slice and put in greased pan to bake.