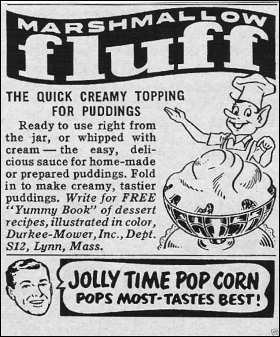 But we haven’t really covered marshmallow creme yet (which is not that interesting of a story) or the brand Fluff (which is much more interesting, I think).

The substance itself was part of an evolution in the late 19th century that saw the marshmallow mixture diluted to a consistency that could be used as a cake filling or a frosting, described as marshmallow paste. The basic ingredients of the proper marshmallow at this point were sugar, egg whites, flavoring (rosewater, in the French iterations), and marshmallow plant extract or gum arabic to thicken the substance into something solid. Solid-ish, anyway.

But what if you didn’t want something quite as solid? White sauces were very much in vogue at the dawn of the 20th century. (Consider the 1915 recipe for creamed potatoes and white sauce from Avon Lake, Ohio.) Well, we’ve talked about how you can use corn syrup to prevent sugar from crystallizing.

So if you add corn syrup to egg whites, sugar, and flavoring, you get something that looks a bit like a marshmallow in color but has the texture of a gooey sauce. And various places came up with this in the early 20th century, but it was Montreal-born Archibald Query of Somerville, Massachusetts who came up with a whipped formulation that had the consistency of something more like peanut butter. He sold it door-to-door in the 1910s, ultimately stopping when sugar rationing put him out of business.

After the war, he sold the recipe to H. Allen Durkee and Fred Mower, partners in a confectionery in Lynn, about twelve miles away from Query’s home. In 1920 the two started selling Toot Sweet Marshmallow Fluff; the French-inspired start of the name didn’t stick, but everything else did.