With chopped condensed mincemeat, I think. 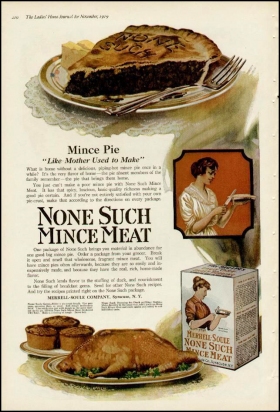 Mincemeat first appeared in cookbooks in the 16th century, when preparations of preserved fruit would be mixed with fat from beef stock and prepared in pies. Over the centuries, the addition of liquor (typically brandy, these days) enhanced the preservative effect of the sugar from the fruit; the mincemeat we enjoy today benefits as much from aging as it does from the ingredients.

The most famous brand of mincemeat in the States is None Such, which we mentioned in the post for mincemeat swirlybuns from Kent, Ohio. While we’re most familiar with the ready-to-use variety in the jar, the classic None Such is basically a brick of concentrated dried fruit, sugar, and a small amount of beef.

If you were making a pie, you’d boil that concentrate and perhaps add in some other ingredients–nuts, for example, or the aforementioned brandy (vinegar is used in the boxed version). But if you were making cookies, the most common suggestion was to simply break the concentrate into pieces and mix them in as if they were chocolate chips.

Here’s the original recipe for cookies from the None Such box:

After Borden bought the brand in the late 1920s, they changed a bit here and there–this is from an insert: