A cake with a history nobody bothered to look up.

Hummingbird cake is a spice cake made with bananas, pineapples, and pecans or walnuts, and is usually covered in cream cheese frosting.

It can be either a layer cake or a tube cake. It’s traditionally associated with the South. And nobody is entirely sure why it’s called hummingbird cake, but it supposedly has something to do with the sweetness and hummingbirds being attracted to sweet things.

This much is true. But here are some other statements about hummingbird cake from other sites around the web:

Well, let me say this about that:

And I should emphasize that Southern Living never made any of these claims. This is all a veneer added by a poor game of telephone across recipe blogs.

Southern Living tells the story plainly: Mrs. L.H. Wiggins submitted a recipe for three-layer (c’mon, now, Joy of Baking, I expect better from you) hummingbird cake that appeared in the February 1978 edition of Southern Living. The recipe on the card here is identical.

That page in its entirety is on their site, but since the card from the recipe box doesn’t include the cream cheese frosting recipe, here’s that portion:

But did she create it? No.

Popularize it? Not really, it was pretty widely known before then. (Actually, one source claims it’s from the mid-19th century, which we’ll come back to.)

Name it? Nope. It had that name for over a decade, at least.

For example, here’s one from the November 23, 1975 edition of the Corsicana (Texas) Daily Sun:

Here’s one from the April 30, 1972 edition of the Middletown (New York) Times Herald Record:

I could go on for hours–it wasn’t just New York and Texas. Before 1978, there are mentions of this cake in newspapers from Ohio, Illinois, Tennessee, Virginia, Indiana, and Maryland, and that was just from searching one source. This was not an arcane recipe suddenly popularized by Southern Living.

The only way you could not know this recipe was older was not to look.

The actual earliest mention I’ve been able to find is from the June 28, 1963 edition of the Port Neches (Texas) Midcounty Chronicle, submitted by “Homemaker of the Week” Nanette DeRoche of 1812 Fairbanks, Nederland:

DeRoche doesn’t claim to have invented the cake, but for what it’s worth, at the time of the article, she was the mother of a 5-year-old girl and had served a tour of duty as a jet mechanic for the Air Force between starting and continuing a degree in Speech and Hearing from Lamar University. 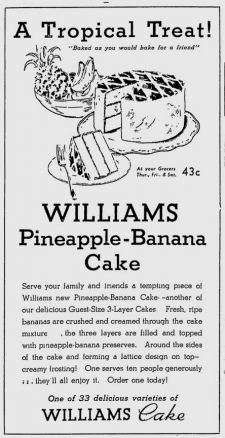 I’m not saying it’s impossible, but until you can show me the recipe, I’m saying I don’t believe it.

The earliest cake I’ve seen that even might be similar is from the advertisement to the right, from the May 16, 1935 edition of The Newburgh (New York) News.

Frankly, Mrs. Wiggins would probably be horrified by this whole affair. She was sharing a recipe she liked, not claiming to be the champion of hummingbird cake for all time.

And now, just for fun, here’s a mention of the cake from an engagement party (at least, I think that’s what it is) from the June 21, 1977 Burlington (North Carolina) Times-News. I normally wouldn’t include something this long, but I just have to because of all of the details about the party. White tablecloth, denim placemats, and red handkerchief napkins anyone?