Chocolate chip cookies had their origin in the Toll House Inn, run by Ruth Graves Wakefield and her husband, around 1930. That much seems to be true. But the official story from Nestle is that she was trying to make “a batch of Butter Drop Do cookies, a favorite recipe dating back to Colonial days[.]” 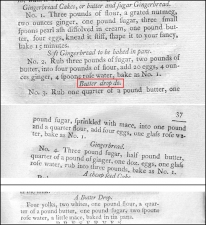 Uh-huh. Well, as other sites have pointed out, there is no such recipe. The only mention of “Butter Drop Do.” is in Amelia Simmons’ 1798 volume of American Cookery (see the image to the left).

The context of the abbreviation “do” (which, by the way, was to reduce the labor of laying out type when it had to be done by hand) was to replace the parts of a sentence that stood where the abbreviation did. Looking at the context, in the image above, I think it means nothing more than “butter drop to be baked in pans,” the italicized words replacing the abbreviation. Further supporting this notion is that, two pages later, another recipe for butter drops is printed, identical except removing two egg whites and a quarter-cup of flour.

So I don’t think it’s so clear that butter drops were considered gingerbread, as such, so much as the book was laid out in a kind of hodge-podge way. But that said, there doesn’t seem to be any realistic chance that butter drop cookies were the inspiration for Toll House Cookies. Apart from the recipe not having any chocolate or nuts in it, bar chocolate wouldn’t have existed until the 19th century.

Newenglandrecipes.org has a much more likely inspiration: Fannie Merritt Farmer’s Chocolate Cookies recipe. But that said, Wakefield’s recipe is still an evolutionary leap forward, introducing bits of chocolate rather than a diffuse chocolate through the cookie.

I prefer to think she was just damn good at what she did. Further evidence of that: she could cook other things, too.

Remember when we talked about Duncan Hines? For what it’s worth, Hines thought the Toll House was good for more than just desserts. From his mention of the restaurant in the November 29, 1948 edition of the St. Petersburg Times:

Ruth Wakefield died in 1977. The Toll House itself burned down in 1984, so the only way to visit it now is on the familiar yellow bag.

Stir in chocolate chips and nuts.

Drop by the rounded measuring teaspoonful onto ungreased cookie sheets.

From the kitchen of Carol Chadwick