A cousin of a parfait, once removed, believe it or not. Or you could think of it as an alternate timeline parfait, I suppose. 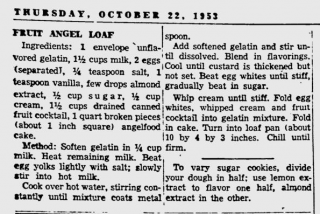 This recipe appeared in the October 22, 1953 edition of The Portsmouth (Ohio) Times.

Parfaits themselves originated in the late 1890s, in France (as the name would suggest, being French for “perfect”). They were, essentially, very smooth granitas. While a granita thrives on the formation of ice crystals that give it the grainy texture that the name implies, a parfait included enough sugar syrup, alcohol, or fat to prevent it from freezing (as opposed to ice cream, which would freeze into a solid brick without churning while it froze). The dessert was often molded, and over time, other ingredients were added to the mix, including things like fruit and cake, providing a surprise for the diners.

Eventually, this gave way to the American parfait, where we took the layering concept but abandoned the substance that the French described as perfect to begin with. Instead, we made ice cream parfaits, whipped cream parfaits, yogurt parfaits and even custard parfaits, all the while layering in fruit, cake pieces, cookie pieces, candy pieces–whatever we could get our hands on.

This dessert is, at its core, a deconstructed American custard parfait. The presentation of molding the ingredients mixed together is, ironically, much closer to the original parfait dessert than the American one. It’s essentially the ingredients of an American parfait presented in the style of a French parfait.

Cool until custard is thickened, but not set.

Turn into large loaf pan about 10 by 4 inches; chill until firm. Unmold and cut into slices. Makes 8-10 servings.