America’s choice in outer space under a Soviet name. 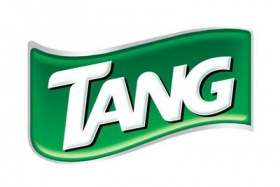 What we’ve got here is a drink mix with instant tea, spices, and powdered orange drink. If you search for “Russian tea” and “Tang,” you’ll get a number of iterations, some of which use instant lemonade in the mix, too.

You’ll also get a bunch of websites with really weird speculation about the name. Wikipedia helpfully quotes a 1976 article in saying that the earliest reference to “Russian Tea” was a 1925 cookbook and there’s no relationship to actual Russian tea.

While there’s no way I could adequately do justice to actual Russian tea without taking up several posts, here’s a basic primer on the Russian style of making and drinking tea. The traditional method involves brewing a very strong concentrate of tea, called zavarka, then pouring some of the the concentrate into a cup and filling the rest with hot water. This allows drinkers to adjust the strength of the brew to their individual taste by changing the amount of zavarka.

Tea is served typically with lemon, sugar, and/or jam. This was in stark contrast to the English tradition of cream, so I’m guessing that’s what made the early iterations of this recipe “Russian.” But how did we get from that to Tang and tea powder? Let’s follow the recipe through the years.

An early American reference to “Russian Tea” is in the December 3, 1882 edition of The New York Times in an article containing advice from a doctor on how to stay hydrated while riding a tricycle recreationally (this has to be the old-time-iest sentence ever on Yesterdish):

And here it is in 1884’s Mrs. Lincoln’s Boston Cook Book by Mary Johnson Bailey Lincoln:

Here’s a mention from the September 29, 1887 edition of the Cambridge City (Indiana) Tribune:

Preserved strawberry, you say? Stick a pin in that and well come back to it.

By the early 20th century, the hot-or-cold lemon tea started to occasionally show up with oranges. Here’s an example from the June 23, 1901 edition of the Syracuse Post Standard:

And in the June 5, 1905 edition of the Waterloo (Iowa) Daily Courier, we see lemon or orange and a bit of vanilla:

Here’s an example from the August 24, 1907 edition of the San Antonio Gazette:

And by the August 22, 1914 edition of the Syracuse Herald, the orange was an alternative to the lemon:

If you’re keeping track, one year after that recipe is the point in the timeline where Wikipedia says the recipe first appeared. Which makes me feel like this:

The lemon, orange, and spices co-existed in this version from the September 1, 1942 edition of the Madison Wisconsin State Journal:

As the era of convenience food started in the 1950s, Russian tea wasn’t far behind, using a powdered store-bought product for its orange flavoring. Just not the one you’re thinking of, just yet.

But in 1957, Bill Mitchell, a food scientist for General Foods, invented a powdered orange drink that hit the market in 1959 to little fanfare. Early marketing attempts didn’t seem to budge the push sales, despite celebrity help:

But we’ve told this part of the story before, in the post for Clara’s energy bars: in 1962, NASA selected Tang powdered drink mix to accompany John Glenn into orbit on the Friendship 7 craft as part of the Mercury-Atlas 6 mission. America was space-crazy and Tang sales skyrocketed.

By 1966, we had the recipe on this card–here, printed in the May 12, 1966 edition of the Statesville (North Carolina) Record and Landmark:

I can’t stop and have a cup of tea yet, because there’s something else very important I need to tell you, should you use the recipe above: in the 1960s, Tang came in 7, 18, and 27-ounce packages. Modern Tang comes in packages as large as (egad) 72 ounces. So be aware, if you go by the package size, they were talking about 27 ounces. Or just use the two cups suggested on our recipe card.

Finally, our departed culinary soulmate recipecurio.com has an undated recipe clipped from a Tang advertisement that suggests, at some point, the company got on board with the trend–but perhaps, given the team it picked in the space race, not with Russians: 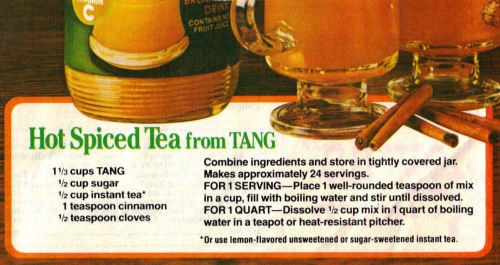 Put in quart jar—shake before each serving.

apollinaris
A brand of sparking mineral water from a spring in Germany, first bottled in 1852. The spring is named after Saint Apollinaris of Ravenna, a man who may not have existed at all, but who is mentioned in church writings a few hundred years after his supposed lifetime. As the story goes, Apollinaris was a Syrian-born follower of Christ, named the first Bishop of Ravenna in Italy by Saint Peter himself. When Emperor Vespasian cast out the Christians, he was beaten to death. Saint Apollinaris was supposedly chosen as he was a patron saint of wine. His patronage also includes venereal disease, for what it's worth.