How about an elaborate Mathematical Punch? 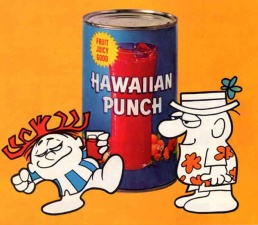 Nine 46-ounce cans would equal 414 ounces of punch. Large frozen lemonade cans are 12 ounces each (and I’m assuming they go in as concentrate as the recipe doesn’t say otherwise). Three quarts is 96 ounces, so all told, the 150 guests are entitled to 3.56 ounces of punch each and 1/150th of a pineapple.

The 46-ounce cans are gone, however, so you need to do a little math. It’s available in gallon jugs; there’s 128 fluid ounces in a gallon. So three gallon jugs equals 384 ounces, leaving us 30 ounces short. There’s also a 32-ounce bottle.

So I’d suggest 3 gallon jugs and one 32-ounce bottle of Hawaiian punch, giving your guests a little bit of a bonus over the original recipe: 3.57333 (repeating) ounces of punch. And, uhm, still one one-hundred-fiftieth of a pineapple.