This may be a good time to discuss what bran actually is.

Bran is the outer layer of cereal grains. We’re usually talking about wheat bran, but bran is present in all grains, including barley and oats. In fact, the difference between white and brown rice is that white rice has the bran layer removed, while in brown rice, the layer is left in place.

I’ll have to dig this up later, but M.F.K. Fisher actually wrote about the absurdity of refined grains; that we’re charged for the process of removing the bran and germ, so that we can have the bran and germ added back to bread, then pay a premium for bread that has been “enriched” with the parts of the grain we already paid to remove.

Obviously, I’m not opposed to refined flours for some applications, but it does seem a bit absurd. If you wanted to buy a lemon, and I sold you one that cost $6, you probably wouldn’t be impressed that it was a $1 lemon that I charged you $3 to peel, then $2 for half of a lemon peel to carry it in. 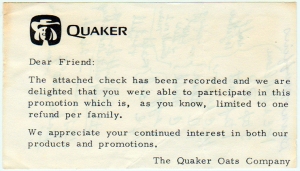 Given that this message from the Quaker Oats company was what the recipe was scribbled on, it’s possible these were oat bran muffins?

In mixing bowl + stir stand / or 2 minutes: [Yeah, I’m not entirely sure what that direction meant either.]