Guess when this recipe appeared? Before you start, I have to admit I’ve never sliced up a recipe like that for the top shot. But LOOK magazine was so glossy and wide that the print would’ve been teeny-tiny if I’d left it in its original orientation, this (click to enlarge):

Well, up front, we know a few things. Look magazine was published every other week from 1937 until 1971, so we can start with that as a window. But the back narrows that even further:

Two things stand out. First, the phrase “…since the peak demands of World War II….” So we know it can’t be earlier than 1945. Second, notice anything funny about the address of the sponsoring company? “Oil Industry Information Committee, 50 West 50th Street, New York 20, N.Y.” 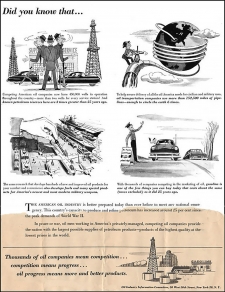 The number 20 is a postal zone, added to the mailing addresses of cities by the post office in 1943 to facilitate delivery. Remember Elvis’ “Return to Sender” from 1962? “No such number, no such zone.”

By 1963, a non-mandatory Zone Improvement Plan added three digits before the postal zone, and in 1965, five-digit ZIP codes became mandatory.

The good news is that narrows the window of time this recipe could have been published to a period between 1945 and 1965. The bad news is that’s still 520 magazines. Hrm. So the next step is to try to match this advertisement to a similar one.

To the above right is an advertisement from the November 27, 1950 edition of Life magazine with the fragment from our page of Look aligned to where it would fit.

A good match, I think you’ll agree? So the next question, then, is whether there was a fruitcake recipe in a Look magazine around late November of 1950. And as it happens, in the December 5, 1950 edition of Look, a recipe for fruit cake appeared toward the end of the magazine.

Which would make this the cover. 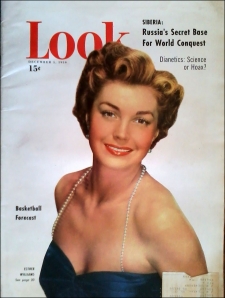 Esther Williams was a three-time national champion swimmer as a teenager in the 1930s; in the 1940s and 1950s, she combined that with her singing talent in a peculiar little sub-genre of film created by MGM to showcase her dual talents: “aqua musicals.”

No, really. They made about a dozen of them, more or less, which is impressive when you consider they had to write a role for her where she’d be swimming within the confines of a story structure.

In 1945’s Thrill of a Romance she played a swim teacher. She played an “aquatic ballet dancer” in 1949’s This Time For Keeps and a swimsuit designer in Neptune’s Daughter. In 1951’s Texas Carnival she’s working in a dunk tank. In 1952’s Skirts Ahoy! she was a naval officer.

You get the idea. My favorite is 1948’s On an Island With You, she played… an actress who stars in aquatic musicals. But on December 5, 1950, she was probably promoting the movie that would be released on the 29th of that month, Pagan Love Song.

Williams, who also took on non-singing and non-swimming roles from time to time, would retire from acting in the 1960s. She passed on in 2013.

Another odd wrinkle to Look magazine between 1945 and 1951 is that one of the contributing photographers was future filmmaker Stanley Kubrick, who would go on to make classic films like Lolita, Dr. Strangelove, 2001, Full Metal Jacket, The Shining, and A Clockwork Orange.

Pour contents of package of cake mix into a large bowl. Add spices to dry mix and stir through to blend. Follow directions on package for adding liquid, substituting orange juice for milk or water. If cake mix calls for eggs, add as directed on package.

Combine fruits and nuts on large piece of waxed paper. Add flour and toss until all pieces are lightly coated. Add to cake batter.

Turn into 9-inch spring tube pan (or two bread loaf pans) that have been greased, lined on bottom with heavy waxed paper and then greased again.

Bake in 300 deg. oven (slow) for 1 hour and 45 minutes. Loosen around edges (if spring form is used, remove side piece). Let stand until cool and then remove from pan.

Cake may be stored in cool place, securely wrapped in several thicknesses of waxed paper, in aluminum foil, or in cellophane.

*To blanch shelled almonds: Bring a cup of water to boil in a small saucepan. Drop in almonds, remove from fire, let stand 5 minutes. Drain and pour cold water over. Drain again, and pinch each nut between fingers to pop kernel out of loosened skin.

Cake shown in color opposite is decorated with candied fruits, nuts, gumdrops cut into leaf shapes; glazed just before serving with this quickie: 1/2 cup orange marmalade heated until melted, then strained, spread thinly over top.