A vehicle for a well-transformed cut of beef. 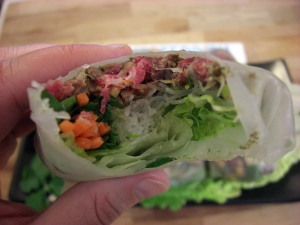 Cold summer rolls made with rice paper wrappers are something like the souffles of South Asian cuisine. They can be as light or rich as you like; they don’t hold well for long periods of time; and they look simple but require a deceptive amount of preparation. Particularly in this case.

There is a point of negative marginal returns in preparing any ingredient, and especially a protein–a point at which further alteration can only do harm. The challenge is to be able to look at each element of a dish and figure out how far away that edge is.

I saw that happen a couple weeks ago at Mile End Deli in Brooklyn, when I tasted their Montreal smoked meat sandwich. Montreal smoked meat is a brisket that’s cured for a week, then hot smoked, and finally steamed; it has a flavor profile sort of like corned beef mixed with Texas barbecue. And like a jazz musician who hears a riff on a saxophone that inspires him to pick up his trumpet, the smoke at Mile End Deli made me pick up my duck fat. (But we’ll come back to that.)

Lay the ingredients inside; fold it in half; fold in the sides; and roll over, pressing down to make the roll as compact as possible. Brain surgery, it isn’t.

The star of this preparation is the steak, and I’ve been tinkering with this one for a few weeks. Skirt steak, which comes from the front of the belly (under the ribs), has the fantastic beef flavor that makes fajitas so memorable. But there are two kinds of skirt steak: outside skirt and inside skirt.

To understand the difference, we need to get into a bit of beef philosophy. Speaking broadly, the more a cow’s muscle works, the tougher and more flavorful it gets.

That’s why the tenderloin (cut from a portion of the cow that doesn’t do much, under the sirloin) is tender, but you need to serve a filet mignon with a sauce. That’s why short ribs, cut from a bit just behind the shoulder, are super flavorful but so tough that they need to be braised.

But there are a couple of muscles that don’t follow this basic rule. The tongue, for example, is hard-working, but tender. (The only thing wrong with the tongue is the psychological barrier to eating it.) The cheeks are another; constantly flexing, but still supple.

Finally, there’s the diaphragm–a muscle that flexes with every breath, but which would become quickly useless if it became tough from that flexing. It’s held together with a membrane that needs to be removed, but once it’s removed and cut against the grain, it’s extremely tender.

Outside skirt is cut from a portion of the diaphragm. And actually, it’s how fajitas got their name–fajita translates to “little belt,” which describes the shape of the outside skirt steak. 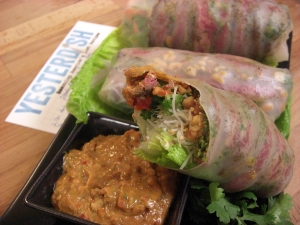 If you can get an outside skirt steak, great. It’s sort of difficult to come by these days because it commands a high price overseas. I certainly couldn’t get one at my local supermarket. Most Mexican restaurants can’t get their hands on them, either.

Instead, I used what they use: the inside skirt, which is actually a piece of the flank (lower portion of the cow’s belly) that extends up into the beef plate. The flank is made of abdominal muscles, which follow the rule of flavorful-but-tough. Cows must have incredible core strength. Who knew?

This is also why there’s some confusion about whether flank steak and skirt steak are the same thing. Inside skirt is from the same muscle; outside skirt is something completely different.

That means we need to tenderize the meat, and there are a few possible ways to do that. There’s chemical tenderizers that use enzymes, either commercially prepared in the form of powders or naturally occurring in the form of mangoes, pineapple, kiwi, figs, or other fruit that contains proteolytic enzymes. We met proteolytic enzymes before in the post for hot corned beef sandwiches from Kent Ohio.

That would work, to a point, but it suffers from a few limitations. First, getting the enzymes to really penetrate the meat can be tricky–you tend to get more tenderizing on the outside than the inside. Second, enzymes don’t know when to stop tenderizing. If you leave the meat too long before cooking, the enzymes will turn the meat into a cottony, gross mess. And obviously, while pineapple and kiwi are fantastic, they’re not exactly the flavors I’m looking for in a steak and peanut spring roll.

Putting our enzyme-carrying fruit aside, we could just marinate the meat in acid, like lime juice or an acidic salad dressing. While it’s far less likely to “over-tenderize” the meat, it doesn’t really address the problem of getting into the tissue.

No, for my money, this is a situation best solved by Adam’s Rule #1: “If violence didn’t solve your problem, you didn’t use enough violence.” I used a tenderizer of little knives stabbing into the meat, which not only solved the tenderizing problem, it helped the flavor penetrate, and created an opportunity.

Tenderizing in this method can sort of “stitch” two pieces of meat together in the way a you might crimp two pieces of paper together in lieu of a stapler. I use that to fold the meat over, which lets me stuff the inside with garlic and parsley while making sure it’s thick enough to produce a nice, rare steak after cooking.

A few words about summer rolls, which travel under the names Vietnamese spring rolls or rice paper rolls. (The “summer” designation is merely to distinguish them from the fried iteration.) You can use a single wrapper if you like, but using two together lets you roll them tighter, and doesn’t interfere with enjoying them. I made a couple each way for this recipe and found that I slightly preferred two.

To use the rice paper wrappers, dip them in hot tap water for about ten seconds, then lay on a flour sack towel or paper towel. Lay the ingredients inside; fold it in half; fold in the sides; and roll over, pressing down to make the roll as compact as possible. Brain surgery, it isn’t.

Which brings us to duck fat, I guess, and a little anecdote. I went to a book signing at Sur la Table to meet Alton Brown, and at Dori’s suggestion, asked him to sign “butter is best.”

Instead, he wrote this: 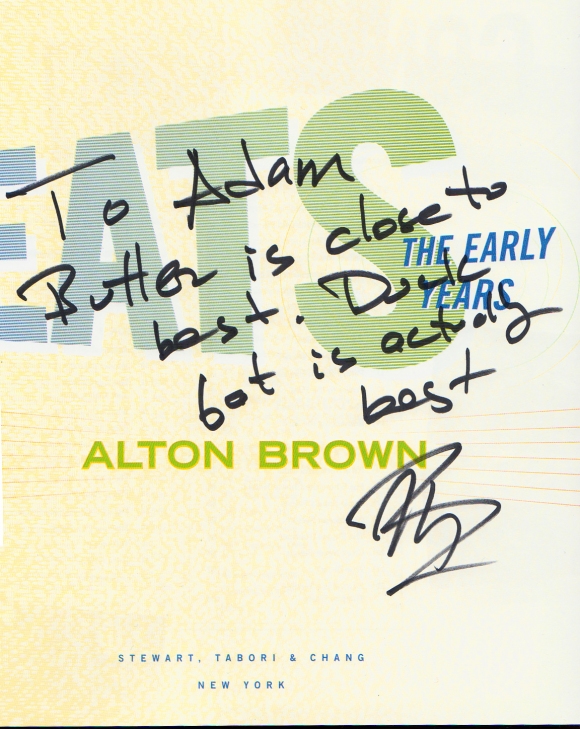 Ergo, because anything less than the best is a felony…