Meet the champ! The champ of the 1963 Pillsbury Bake-Off, that is.

Here’s an ad with the recipe from the January 22, 1964 edition of the The (San Mateo, California) Times:

As you can see, the recipe in the ad is a bit more detailed. 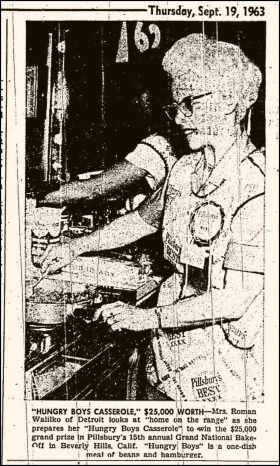 Mmph. Well, with all due respect to Roman Walilko–who was a first-generation American born to Polish immigrants and who grew up to be an engineer–I’d like to know his wife’s name, since it’s her recipe.

Mrs. Roman Walilko was born Miraslava (Mira) Watha Kosicki in Canada in 1916 to Catherine and Witold Kosicki, immigrants from Russia of Polish descent. Mira was born in September; that same year, the Kosicki family moved to Detroit.

Witold was a construction engineer who worked for a mill supplier. Catherine, for her part, was a talented artist with paint and tapestry, and that talent ran in the family; one of Mira’s brothers later became accomplished sculptor.

By 1940, Mira was an elementary school teacher in Detroit.

She was a poet, publishing primarily in the Detroit Free Press, although she also had other stories to tell. From the Jan 21, 1956 edition of the Traverse City (Michigan) Record-Eagle: 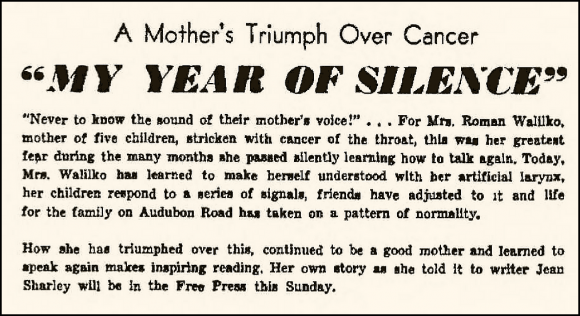 After the Bake-Off, she stayed active in photography and school committees until her death in 1999. While she may have been most famous for something she named after her sons, that doesn’t mean she didn’t appreciate her daughters, and the special bond she had with them. Mira’s mother died in April 1961. In June of 1961, she published the following poem in LDS magazine The Improvement Era:

There. Now you’ve met the Champ.

Pour into 12 by 8 inch casserole. Top with biscuits.

Combine flour, baking power and salt in mixing bowl. Combine oil and milk; add to dry ingredients all at once, stirring until dough clings together.

Knead on lightly floured surface 8 times. Roll out to a 12 by 8 inch rectangle. Spread with reserved meat mixture.

*(For use with self-rising flour, increase flour to 1-1/4 cups; omit baking powder and salt.)