And how cowboy diplomacy made curry as English as tangerines.

We recently learned that yaki means grilled, when you see it in the name of a Japanese food; soba is a thin noodle. (Soba is also buckwheat, and originally referred specifically to a buckwheat noodle, but the term has been adopted to describe any thin noodle.)

Given the logistical obstacles of grilling noodles on a Weber, you might suppose there must be other kinds of grilling. You’re right; yaki-soba are grilled on a teppan, or iron plate. Here’s a chef starting to make teppanyaki rice by cracking an egg:

Perhaps not every step in that video is essential. But that’s teppanyaki for you. Let’s talk a bit about curry, because you might ask yourself, given the 4,186.04 miles between Mumbai and Tokyo, how did a curry powder come to show up in a Japanese noodle dish?

Well, to explain, we have to start in the late 16th century with William Adams. 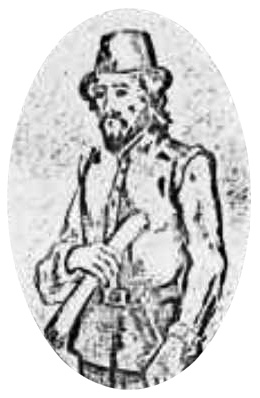 Adams was an Englishman who was employed by the Dutch East India company. In 1598, Adams was a member of a five-ship Dutch expedition that was supposed to sail for South America, with Japan as a backup plan if something went wrong. Everything went wrong. Ultimately, only one ship arrived in Japan, with only twenty men surviving of its original crew.

The Portuguese were already active in Japan, having set up a Jesuit mission there in the mid-16th century. As the Portuguese were at war with the Dutch, the Portuguese Jesuits helpfully (not really) told the Japanese that Adams’ distressed ship was a pirate ship and the men should be executed. It didn’t work, and Adams would go on to be the first Western samurai.

This is mostly important because of the events that followed Adams’ death in 1620. At the time, Japan had foreign relations with the Portuguese, Dutch, English, and New Spain (the Spanish holdings in North and Central America). But in 1637 and 1638, a (largely) peasant uprising took place in Southwestern Japan, probably caused by an increase in taxes combined with religious persecution against converts to Catholicism.

The Dutch East India company, always looking to be helpful to their Portuguese friends (not really), helped the shogunate suppress the rebellion and didn’t object to the conclusion that this was caused by those trouble-making European Catholics. In reaction, the shogunate closed off trade with much of the outside world in 1639, restricting foreign trade to one island, where the Koreans, Chinese, and Dutch were permitted to trade. 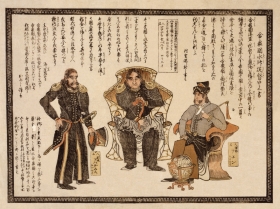 This was the status quo until the mid-19th century. In 1853, American Commodore Matthew C. Perry’s fleet arrived in Edo with a plan to open Japan to trade. He demonstrated the firepower of his fleet by shelling buildings in the harbor–with explosive shells, something the Japanese didn’t use at the time. Perry delivered a letter from President Fillmore ever-so-politely suggesting Japan should be open to trade, along with a white flag–just in case they should need one. Perry said he would return for an answer and sailed off.

In 1854, he returned with more ships–but Japan had agreed to his terms. This generally referred to as the “forced opening” of Japan. (Such an ugly term. I prefer to think he made them an export they couldn’t refuse.)

Either way, the British returned, and by this time India was under British control, and the East India Company was shipping curry powder from India to Singapore, then to ports in Sichuan, and ultimately to Japan. Where curry was embraced… as an English food.

Hey, we all make mistakes. Why do you think one variety of mandarin oranges is called tangerines? But that’s another recipe…

Beef, fish or shrimp can be substituted for chicken.