And remembering M.F.K. Fisher on her 105th birthday. 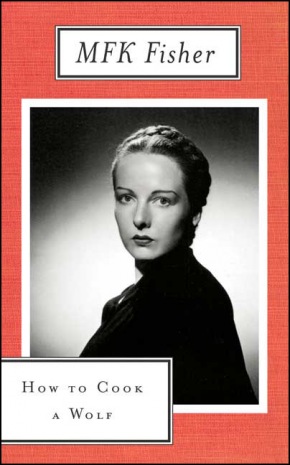 In an earlier bran muffin recipe from another box (where we talked about bran, so check that out for a refresher), I mentioned M.F.K. Fisher writing something relevant about the process of refining grains, and I promised to look it up, then didn’t.

So now I did, and here’s a bit about her, too, since it’s her birthday. Just a very light review, given that her life is far too rich to be devoured in one sitting.

Mary Francis Kennedy was born in in Albion, Michigan on July 3, 1908. Her father edited a newspaper he co-cowned with his brother. When she was two, he sold his interest to his brother and moved the family to California, taking different reporting and editing jobs through her childhood. Later, in The Gastronomical Me, she would write that her earliest memory of food was as a four-year-old, tasting what her Grandmother skimmed from the kettle of strawberry jam.

She attended private schools, then went on to a year of Illinois College, a summer program at UCLA and a year at Occidental College, where she met her future husband, Alfred Fisher. Al was transferring to the University of Burgundy to finish his teaching doctorate; Mary left with him and moved to Dijon, France in 1929, where any remaining doors in her culinary universe were kicked open wide.

After obtaining his doctorate, the pair moved back to California in 1932, where Mary would start to write and submit fictional pieces while researching old recipes in the library. They would separate in 1938, and she would end up marrying a recently-divorced painter who had been a friend of the couple in 1938, living with him briefly in Switzerland. He was diagnosed with a progressive illness, and they returned to California, where he would ultimately take his life in 1941.

In 1942, M.F.K. Fisher would publish How to Cook a Wolf, a book that is as much about desire itself as it is food. The wolf is hunger at the door, but Fisher would write later (in the aforementioned The Gastronomical Me), “[W]hen I write about hunger, I am really writing about love and the hunger for it, and warmth, and the love of it… and then the warmth and richness and fine reality of hunger satisfied… and it is all one.” (Compare Keats’ “Ode on Melancholy,” and his advice to glut thy sorrow on a morning rose.)

A brutal series of years had forged a brutal honesty in Fisher, and she wrote cleanly and directly, though with humor, about satisfying hungers. About bread, she wrote:

For years you have had to be a voice crying in the wilderness to dare say anything against the mockery of our staff of life, and now, when war and perhaps a growing sensibility have made us think more of vitamins and their relation to poor teeth and jumpy nerves and such, we still condone the stupid bread in this country.

Newspapers tell us, with government permission, that wheat costing some five cents a pound is “refined” until is it not only tasteless but almost worthless nutritionally, and that the wheat germ which is thus removed is then sold for at least a dollar and a half and at the end put back in the bread, so that in loaves it can be sold for a little more than the ordinary price and called “Super-Vitaminized” or “Energized or some such thing.

We’ll talk more about M.F.K. Fisher’s life and particularly her later life, but for now, I’ll tell you she did marry again, and had children (not entirely in that order), and continued to share her thoughts and experiences (and desires, satisfied and otherwise) until her death in 1992. But for now, happy birthday, M.F.K. Fisher. I’m going to skim some strawberry jam in your honor.

(Use non-fat spray or paper liner.)

Bake at 375 deg. for 25 minutes or until toothpick comes out clean.

You may add 1/2 c. grated zucchini or bananas or both.

Use cinnamon or nutmeg for seasonings. Add extra calories.